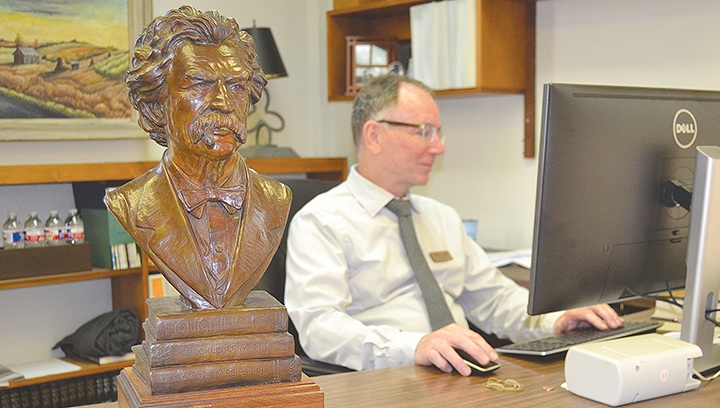 Photo by Donna Campbell/Henry Ledet, director of the Lincoln-Lawrence-Franklin Regional Library System, makes final preparations for an open house to be held Thursday at the Brookhaven main branch at which this bronze bust of Mark Twain, created by the late Bruce Brady, will officially be moved to its new home in the main lobby.

On Thursday, Henry Ledet, director of the Lincoln-Lawrence-Franklin Regional Library System, will officially unveil a bronze bust of Samuel Langhorne Clemens, an American writer, entrepreneur, publisher and lecturer who was best known by his pen name Mark Twain.

The bust, created by Brookhaven sculptor, the late Bruce Brady, will be welcomed to its new home on a pedestal in the main lobby of the Brookhaven branch during an open house from 5 to 7 p.m.

It’s the first real piece purchased for the Lincoln County Public Library’s art collection since the Board of Trustees began their fundraising efforts a year ago, Ledet said.

Showcasing Mississippi artists has been a goal of Ledet’s for the 40 years he’s been with the library. He wanted to add “real quality art” to the library for the public to enjoy, but budgets didn’t allow for it.

“Unfortunately, there was never any money for that,” he said.

The library’s Board of Trustees agreed with Ledet and decided to raise money for an art collection on their own. “They were shamelessly begging all over town,” he said.

“People have been very generous,” he said. “They apparently agree that great art is important to our community.”

More than $26,000 was raised to purchase art for the library, he said.

The library already had a few donated pieces Ledet is proud to showcase. Brookhaven native Emmitt Thames’ artwork is there, as is some by Mississippi artists Mildred Wolfe and Wyatt Waters.

They came across the Brady sculpture by accident, or rather, through good luck.

Sculptor Kim Sessums, a Brookhaven OBGYN, saw it at Brown’s Gallery in Jackson and discovered it was for sale for a “very reasonable price,” Ledet said. “He said ‘Somebody should jump on it.’”

Ledet said they paid $9,000 for the bronze bust, which depicts the iconic author smoking one of his trademark cigars.

“Bruce put the patina on it himself, which makes it more valuable,” he said. “He did the color himself so it’s exactly the color he wanted it to be.”

The bust is perched on top of three bronze books, all penned by Twain: “Roughing It,” “Huckleberry Finn” and “Life on the Mississippi.”

All three works are available at the library, Ledet said.

Now that the Brady piece is at the library, Ledet plans to add to the collection, purchasing works by “people who have a great, strong connection to Brookhaven.”

Ledet would like to add a piece by Sessums, he said.

The guest speaker for the open house will be Jack Kyle, the senior director of arts development and chair of arts administration at Belhaven University. Kyle is nationally recognized for his services to the arts as former chairman of the Mississippi Commission for International Cultural Exchange.

Kyle and Brady were good friends.

“I think he’ll have some interesting things to say,” Ledet said.

Light refreshments will be served and library staff will be available to give tours to the public and answer questions.

Photo by Aaron Paden/Children aged 3 and 4 at the Lindsey Head Start Center constructed headbands and posters in celebration... read more