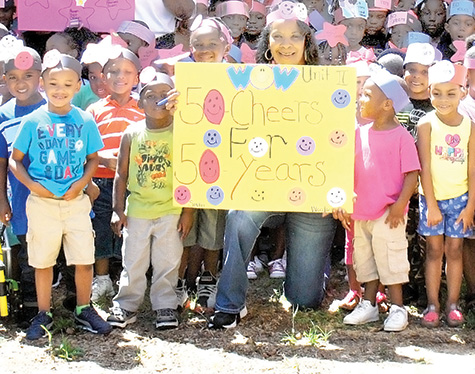 Photo by Aaron Paden/Children aged 3 and 4 at the Lindsey Head Start Center constructed headbands and posters in celebration of Mississippi Action for Progress’s 50th anniversary. The organization educates children in low-income families in preparation for kindergarten.

Teachers and students at the Lindsey Head Start Center on Tuesday celebrated the 50th anniversary of Mississippi Action for Progress, which has been helping them keep their doors open since 1966.

MAP has been providing preschool and daycare services for children in low-income families for half a century. The organization’s goal is to give low-income families a head start with their young children by providing them with an early education that prepares them for kindergarten, according to teacher Cassandra Barnes, who said the organization provided an important service for the community.

“We pray it will be here a long, long time,” she said

There doesn’t appear to be any danger of MAP leaving Lincoln County any time soon. While MAP is a statewide organization headquartered in Jackson, they’ve been operating in Lincoln County out of the Lindsey Head Start Center since 1966, though it was originally named St. James. Barnes said Ollie Johnson and Josie Lloyd, who were among those who originally kickstarted the center in Lincoln County, are still working at the center as teachers today.

The organization has a registration drive every January but Barnes said they’re always looking for more people to register. There are currently 112 students enrolled in the center.

While the organization is federally funded through the national Head Start office and there’s no cost of admission, there are some requirements for parents. Parents must have a Social Security number, and their children must be covered by Medicaid or some kind of medical insurance. Because the center serves low-income families, parents must show proof of income, and all students must have their shot records in order.

Barnes said parents are often active participants at the center, volunteering and helping to organize events.

“We just want to thank our parents for helping us,” she said. We have one of the best groups of parents.”

A Brookhaven High School senior is one of only 132 students in the state to be named a semi-finalist in... read more