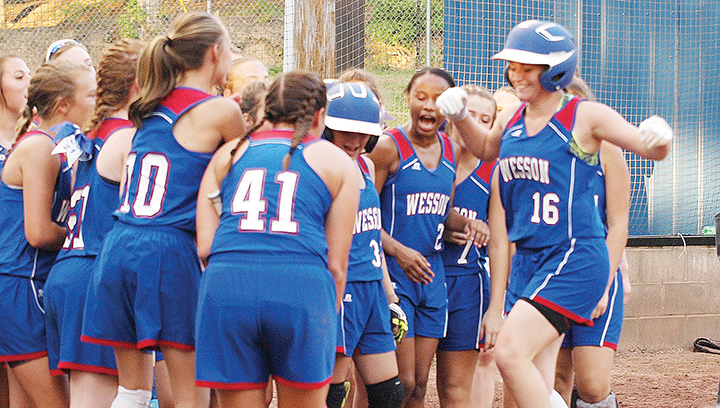 Photo submitted/Wesson’s Nikki Guess comes in to home for her first career homerun during the Cobras’ win against the Hazlehurst Indians Tuesday.

The Wesson Lady Cobras hosted the Hazlehurst Lady Indians Tuesday night and gained another notch in their conference win total. The Lady Cobras dominated the game and took the win with a final score of 24-6.

Wesson was a powerful force at the plate and racked up the runs in the first inning. Close out pitcher Shaylin Green struck out three batters and also hit three singles on the night.

On defense, the Cobras’ starting catcher Green made three crucial outs at home plate and Ashley defended first base for three outs with assists by Shaylin Green and Brook Jones. Shelbi Maxwell also played left center and tallied two outs and Douglas got two outs on second base.

Wesson will travel to Crystal Springs Thursday to face the Lady Tigers. The varsity game begins at 4 p.m.

The JV Lady Cobras also got a win over the JV Lady Indians with a final score of 12-2. Winning pitcher Shaylin Green posted two strikeouts and three walks. The top hitter was Katie Westbrook with a three-run homerun and a two-run double. Green had two RBIs and hit a double and a single and Natalie Bonds hit a double. Laynee Crapps and Kyla Smith hit two singles and Alyssa Carraway, Lexie Guess, Emma Britt and Alayna Westrope hit a single each.  First baseman Laynee Crapps had seven outs with assists from Green and Smith.

The Brookhaven Academy Cougars fell 15-3 on the road to Columbia Academy Tuesday. The Cougars surrendered 12 hits on the night, five of which were doubles.

Their offensive effort was led by Kailyn Jordan’s triple and single. Starting pitcher Madi Smith had a double and Anna Grace Covington had a single.

“Give credit to Columbia for coming out swinging and put the ball everywhere we weren’t,” BA head coach Becky Flowers said. “Our hitters put the bat on their senior pitcher hard, it just went right at their defense.”

The loss hurt the Cougars’ playoff chances moving forward, but Flowers said she is remaining optimistic.

“I’m staying positive. I still believe in this group of young athletes and know our best softball is yet to come,” she said.

The Cougars’ will head to Brandon Saturday for a tournament.

Led by homeruns from Kyla and Jada Henderson, the Panthers rolled to a 20-8 victory over the Pearl Pirates Tuesday.

“Tonight was huge for us,” Ole Brook head coach Mandy Vinson said. “Our girls bounced back after getting beat last night and played extremely well.”

Tia Bussey and Kat Wallace each had three singles. Cheyenne Motley had a single and double, while senior Macy Ziskin posted a double and single in the win.

The Panthers will face a tough West Lincoln Bears team at home Thursday. The first game will begin at 5 p.m.

It would have been great to be able to write this column after a weekend where it all went according... read more