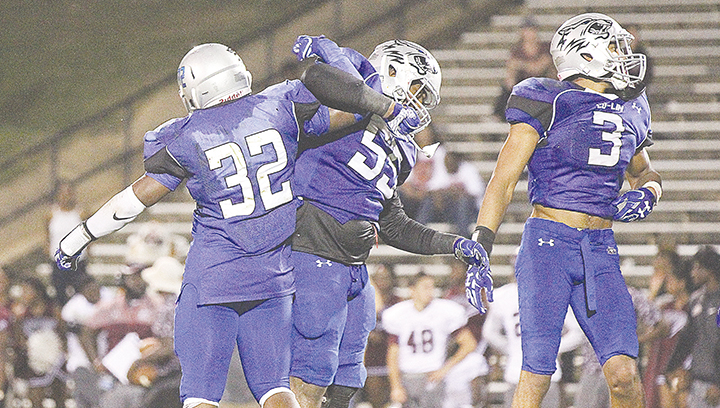 Photo by Amy Rhoads /Co-Lin linebacker Micheal Graham and defensive lineman Deion Pope will lead the Wolves’ defense into its toughest test yet on the road against Mississippi Gulf Coast tonight.

The Copiah-Lincoln Community College Wolves (1-1) travel to Perkinston to take on the Bulldogs of Mississippi Gulf Coast (0-2) tonight.

Gulf Coast, a preseason nationally ranked team, is coming off a 45-7 loss to East Mississippi last week while the Wolves defeated Coahoma 26-6. Kickoff is scheduled for 7 p.m. Listen to the action live at colinathletics.com or on 104.3 FM.

Ladarius Galloway had another tremendous performance in week two as he rushed for 154 yards and two touchdowns on just 23 carries. Look for the Wolves’ coaching staff to continue to utilize the shifty back against the Bulldogs. Galloway’s rushing attack has also opened more opportunities for the Co-Lin passing game as well.

Freshman wide receiver Nero Nelson made his presence known against Coahoma as he grabbed two completions for 75 yards, including a 40-yard touchdown pass.

Defensively, Co-Lin has had two dominating performances, giving up an average of just 95 yards of total offense, and only six points on the year. Michael Graham led the Wolves’ defense in week two as he tallied seven tackles, three assists, three tackles for loss and one sack. The DeSoto Central High School graduate also grabbed his second interception on the year. The stellar performance landed Graham Mississippi Association of Junior and Community Colleges Defensive Player of the Week honors for the first time in his career. Colton Magee also played well with six tackles and two assists, while Tyree Owens racked up two sacks.

Heading into week three, the Wolves hope to continue their ferocious defensive play by applying pressure up front. With Galloway in the backfield and quarterback Dominic DeLira taking snaps, expect a well-balanced offensive attack that can light up the scoreboard through the air or on the ground. Though the Bulldogs have suffered two losses, a road game in Perkinston will be the Wolves’ toughest contest thus far in 2016.

Co-Lin’s football program has been sanctioned by the National Junior College Athletic Association to forfeit the week one 44-0 win against Mississippi Delta. The forfeiture is due to an ineligible player who participated in the game. The issue has since been resolved.