Graveside services for Lamar Kyzar, of Cleburne, Texas, will be held Saturday, Sept. 17, 2016, at 11 a.m. at Bogue Chitto Cemetery. Rev. Wayne Moak will officiate. Riverwood Family Funeral Service is in charge of arrangements. 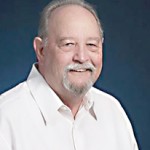 Mr. Kyzar was a doting husband, father, grandfather, and friend to many. He worked in the garment industry for 52 years, previously with Stahl Urban, and the last 30 with Walls Industries, serving as the technical design manager.  Before moving to Texas, he was a deacon at Bogue Chitto Baptist Church. He was a member of Nolan River Road Baptist church in Cleburne, Texas.

Preceding him in death were his parents; and one brother, Marvin Kyzar.

Survivors include his beloved wife of 48 years, Betty Kyzar, of Cleburne, Texas; sons, Derek Kyzar and wife, Michelle, of Sherman, Texas, and Chad Kyzar and wife, Kathleen, of Fort Worth, Texas; sister, Peggy Holmes, of Bogue Chitto; sisters-in-law, Shirley Newman, of Wesson, and Fay Smith, of Grenada; four grandchildren, Claire, Brayden, Ryland and Andrew; and a host of nieces, nephews, other relatives and friends.

To express your thought to the family, you may visit riverwoodfamily.com and click on his name to leave a comment.