A Brookhaven state trooper injured in a wreck Sunday on his way to help others remains in serious condition at a Jackson hospital. 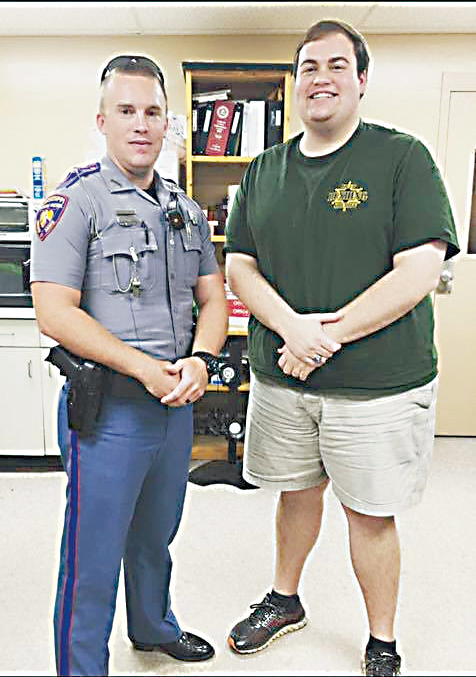 Photo submitted/Zach Harveston, a communications officer with the Lincoln County Sheriff’s Office and Mississippi Highway Patrol (right), is raising funds to help his friend, trooper Mitchell Chappell (left) who was injured Sunday when his cruiser hydroplaned on I-55 while on his way to a wreck.

M18 Mitchell Chappell is in the critical care unit at University of Mississippi Medical Center. His injuries include a fractured skull on the back of his head, but he’s awake and recognizes his wife, Amanda, who is staying at the hospital with him, said MHP spokesman Cpl. Brandon Fortenberry.

Chappell was on his way to a traffic accident in Bogue Chitto when his car apparently hydroplaned in the northbound lane of I-55 near mile marker 31. Dispatchers lost radio contact with him and he was found soon after unconscious in the restraints of his cruiser, which had collided with a patch of trees, Fortenberry said.

A trooper who responded to Chappell’s wreck took the injured trooper in his own vehicle, rather than waiting for the ambulance that had been dispatched from King’s Daughters Medical Center, but also hydroplaned about seven miles away on Hwy. 84 on his way to the hospital. The trooper wasn’t injured and the Chappell wasn’t injured further, Forteberry said.

All three cruisers were totaled, Fortenberry said. The other two troopers, who have not been identified, were not injured.

Zach Harveston, a communications officer with the Lincoln County Sheriff’s Office and MHP, started a gofundme account for his friend Monday to help with expenses the family will incur while Chappell is in the hospital. He said Amanda Chappell, a nursing supervisor with a home health care agency, is staying at the hospital with her husband.

Donations can be also be made to the “Benefit Account for Mitchell Chappell” at any branch of Regions Bank. 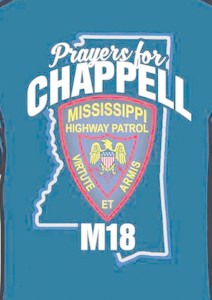 Harveston and others have also designed T-shirts which will be sold in three batches. The blue T-shirts have the Troop M MHP logo on the front and “Prayers for Chappell – M18” on the back with a larger MHP logo over an outline of the state. Shirts are $15 for short sleeve and $20 for long sleeve and come in sizes youth small to adult 4X. Shirts will be ordered Sept. 23, Oct. 7 and Oct. 21 at the following locations:

Shirts can be picked up where they were ordered within a week and a half to two weeks, Harveston said.

Fortenberry said Chappell is a good man who tries to help others. On the morning of the crash, he’d participated with other troopers at the 9/11 Memorial Run in McComb.

He said the community support has been wonderful. He said others in the community are also hosting fundraisers for Chappell, though he didn’t have the details.

“He thinks about everyone else and people are trying to think about him,” he said. “You’ve got people out of generosity, coming by the substation in Brookhaven, and handing over money so we can give it to the family. There’s a lot of people chipping in in this time of need.”

Photo submitted/Locals hitch a ride into the forest on a tractor for the 2015 Lincoln County Forestry Association seminars. With... read more