Cars to line the avenue for Ole Brook 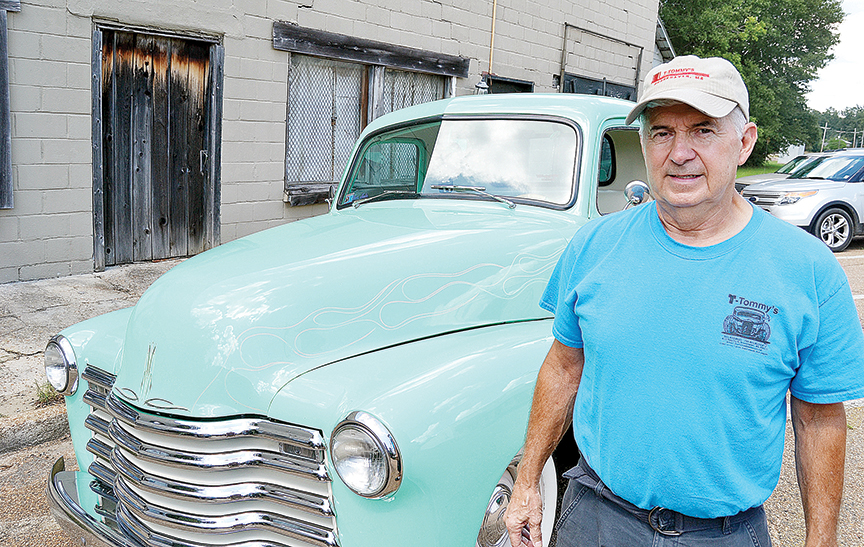 Photo by Donna Campbell/Tommy Smith tools around town in his ’48 Chevy pickup that’s as old as he is. He’ll have the green beauty on display Oct. 1 at the Ole Brook Festival Car Show, but there’s plenty of room for more. Reservations for a space are $10. For information, call 601-833-1411.

Tommy Smith’s trucks are always as old as he is.

The Brookhaven man is partial to ’48 Chevys, and for the past six months, it’s been one that’s spearmint green. It was that color when he bought from a seller in Indiana after six weeks of negotiating.

Smith is one of the organizers of the Ole Brook Festival Car Show, which will be held Oct. 1 in downtown Brookhaven.

His first vehicle was a ’36 Dodge four-door sedan though.

One man’s junk is another man’s treasure, and Smith sold it before he could even get it fixed up.

His truck is considered a street rod, which means it was built before 1948 and it’s not all original parts. The frame and body are the only thing that’s still original, he said.

Smith enjoys getting the approving stares and the thumbs up when he drives by.

“It’s the recognition you’re looking for,” he said.

He knows he’s got a pretty ride. It’s a showstopper in contests, though he won’t be entering the Ole Brook show since he’s involved in the organization.

He’d like to see the car show draw at least 100 entries. It’s an open show, with space for cars, trucks and even motorcycles of any year.

They’ll be set up along Railroad Avenue from East Monticello Street to West Chickasaw Street.

Registration is available for $10. Forms are available at the Brookhaven-Lincoln County Chamber of Commerce and registration can be made on the day of the show from 8 to 11 a.m.

Awards will be announced at 2 p.m.

The show is sponsored by GT Collision and Accessories.