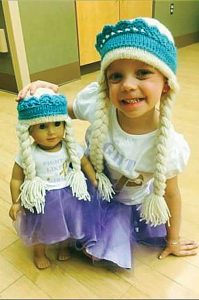 Photo submitted/Analiese Cook, a 4-year-old cancer survivor, and her mom Angela Cook have partnered with Walmart to raise awareness of childhood cancer

A Brookhaven mother and her daughter are joining forces with Walmart to raise awareness about childhood cancer, while collecting money for the Blair E. Batson Children’s Hospital in Jackson — the only children’s hospital in the state.

In the United States alone, there are about 15,780 children diagnosed with cancer each year, according to the American Childhood Cancer Organization.

On Sunday from 2 to 4 p.m., Angela Cook and her 4-year-old daughter Analiese will be at Walmart to give out gold balloons to remind people of the very real children who are affected by cancer, often without warning.

Walmart and Sam’s Club have been raising money for children’s hospitals since 1987, raising nearly a billion dollars for hospitals in the Children’s Miracle Network. In 2015, they raised $60 million — $186,810 going directly to the Blair E. Batson Children’s Hospital.

Walmart customers in Brookhaven will have the opportunity to donate directly to the Batson Hospital until Oct. 9. Personnel Manager Debbie Duncan said there will be a simple prompt asking for donations during checkout. Cook hopes that when people check out, they’ll think of her little cancer survivor.

“It puts a face to a name,” Cook said. “So they understand what Walmart is giving to.”

“It could be your child,” Cook said. “We had no idea this is going to happen to us. I can’t think of a better cause for anybody to give to.”

Cook said things have calmed down a little now, though Analiese will still need to undergo another two years of chemotherapy. According to Cook, three years of treatment can cost up to $1 million dollars, but childhood cancers only receive about 3.8 percent of donations for cancer treatment.

“That just doesn’t sit well with me,” Cook said. “These babies deserve a life.”