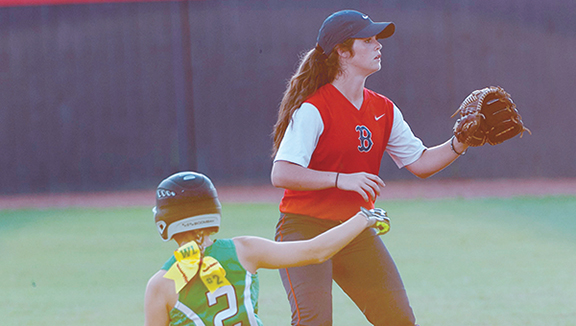 Photo by Teresa Allred /Sara Jane Doty slides safely into second base during the Bears’ game against the Brookhaven Panthers Thursday.

It took the Ole Brook Panthers slow-pitch softball team a little while to get going in their home game against the West Lincoln Bears Thursday night.

However, their bats woke up in the third inning and Brookhaven (9-4) defeated the Bears 12-2.

“Proud of the girls. We hit the ball well and we were able to go behind runners when needed to. It was a big win for us,” Lady Panthers coach Mandy Vinson said.

The Panthers had trouble fielding the ball in the early portions of the contest. A missed throw to first base allowed the Bears to score the game’s first run.

They corrected their errors though, and were able to throw out West Lincoln’s Kelsey Freeman as she tried to stretch a single into a double. The Bears brought in their second run in the process to put the score at 2-0.

In the bottom of the first, Ole Brook’s Cheyenne Motley led things off with a single. Kat Wallace followed with a one-run triple to cut the Bears’ lead in half.

Macy Ziskin kept things going with a single to score Wallace and tie the game at two. The Bears’ defense ended the threat before the Panthers could take the lead.

The Panthers’ offense came to life in the bottom of the third. Jada Henderson hit a double to drive in a run and the Panthers would score again on a late throw to home plate. Then, Meg Foster hit a two-run homerun to push the Lady Panthers’ lead to 6-2.

Motley picked up the win, while Makennah Redd took the loss on the mound for the Bears.

“We started off good but couldn’t keep the momentum. Errors took us out of the game. I’m proud of the girls for playing hard and for the way they kept trying,” Bears coach Andrew Redd said.

In junior varsity action, the girls played a close game with West Lincoln picking up the win 7-5. The Panthers will host a tournament this Saturday beginning at 8 a.m. West Lincoln will head to a tournament in Wesson.

The Bobcats beat the Red Devils on the road 16-4 to improve to 7-4 overall on the year. Bogue Chitto put up six runs in the first two innings to jump out to an early lead it would not relinquish.

“We hit the ball extremely well tonight and it was a great district win,” head coach Scott Leggett said.

Stevie Montgomery got the win while the Red Devils’ Jamie Parker took the loss. Karly Leake had two triples and a single on the night. Codi Leggett and Montgomery added a triple and two singles.

Baileigh Jackson and Kylie Chapman had one single each. The Bobcats will be one of four teams at the Ole Brook tournament Saturday.

The Cobras defeated Crystal Springs 23-2. Shelbi Maxwell went 4-4 on the night with three singles and one double. Riley Smith was also perfect on the night and hit two singles and a double.

The Cobras will host a tournament Saturday. The time is yet to be announced.

File photo/Madison Smith and the Brookhaven Academy Cougars hope for their first win of the season at home tonight against... read more