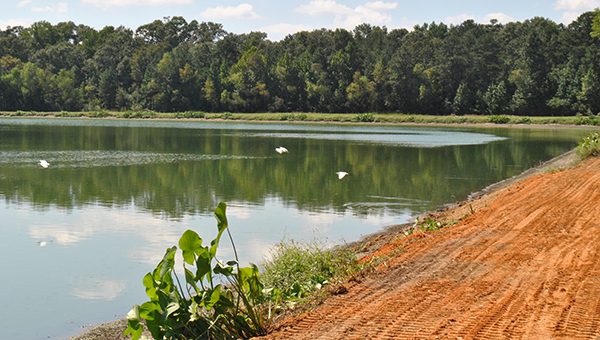 Photo by Aaron Paden/The lagoon across from Hwy. 84 is home to a variety of wildlife. Repairs on the levee were completed Tuesday, according to Regional Manager Ralph Augimeri with Mitchell Technical Services.

Repairs for a breached levee at the Brookhaven Wastewater Treatment Plant were completed Tuesday, according to Regional Manager Ralph Augimeri with Mitchell Technical Services.

Augimeri spoke Tuesday at the Brookhaven Board of Alderman meeting to report on the breach.

Augimeri said the lagoon had not been in use for about a month because of heavy rains.

Augimeri said their testing has so far shown no environmental impact from the leak. Teams were able to put up an inflatable plug to stop the leak within three hours.

“It went very well,” Public works director Keith Lewis added at the meeting. “It’s what we’re supposed to do. We’ve done our job.”

Representatives from the Mississippi Department of Environmental Quality have said that they will be looking closely at the situation and may consider imposing fines. Augimeri said he couldn’t say for sure that they wouldn’t, but he believed it was unlikely because they would have to show either environmental harm or maleficence.

The lagoon was built in 1964 — predating Hwy. 84, according to Augimeri — and he said it has stood up well considering. There is a host of wildlife at the lagoon, and he believes the levees were damaged by beaver burrows. The beaver population, he said, is typically controlled by alligators who live at the lagoon.

The board entered executive session to discuss a personnel matter and a letter delivered to the board from King’s Daughters Medical Center requesting the right to remove a fire cabinet. Ward 4 Alderman Shirley Estes was asked to recuse herself from the KDMC discussion because of her affiliation with the hospital.

Following the executive session, Sherwin Watley was terminated after not showing up for work for several days during a 90-day probationary period.

Mayor Joe Cox said the board felt it would be appropriate to follow the fire code on the KDMC matter and resolved to send their response to the hospital.

• The city approved an ordinance regulating the personal use of city computers.

• The board received a privilege license report showing $4,466.85 in revenue for August.

• The board received a municipal court report showing $37,726.37 in revenue for August.

• The board received a report from the Brookhaven Fire Department showing 24 runs in the city limits and two runs outside of the city.

• Cox was authorized to execute the interlocal agreement between the Lincoln County jail and the City of Brookhaven.

• Cox was authorized to execute the storage and service agreement with The File Depot for permanent storage of the city’s files and records.

• The board approved a beer permit for Fred’s Dollar Stores, located at 964 Brookway Blvd. and 218 S. Whitworth Ave.

• Jermaine Culver was approved to attend the Fire Ground Leadership class at the State Fire Academy on Sept. 26-29. Culver will be provided with transportation, $360 for the cost of the class and $60 for meals.

• Chief Tony Weeks and Captain Eric Smith were approved to attend the 2016 Mississippi Fire Investigators Seminar in Natchez on Oct. 19-21.The cost of the seminar is $150 per person. Transportation will be provided, and Weeks and Smith will be reimbursed a limited amount for meals.

• The board approved Star Services to maintain the heating, ventilation and air conditioning at city buildings for $17,868, effective Oct. 1.

Photo submitted/Brookhaven Academy’s Fisher Warren tries to avoid Wyatt Brabham of Centreville during their game earlier in the year. The... read more