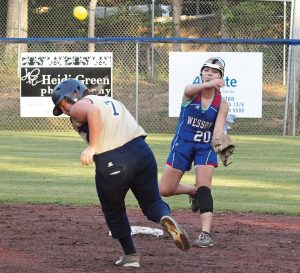 Photo by Tracy Fischer/Wesson second baseman Arie Douglas tags out Bogue Chitto’s Savannah Frith and makes a throw to first in a meeting between the team’s earlier this season.

The Lady Cobras took an early lead and held the Lady Bobcats to take the win with a final score of 4-2 at home Tuesday night.

Bogue Chitto started out with some heavy hitters in their lineup, but Wesson’s outfielders, Amber Brinson and Aurianna Vaughn, prevented the Lady Bobcats from loading the bases.

In the bottom of the first inning, Wesson took an early lead with Brinson hitting a homerun to put the first run on the score board. Vaughn followed with a two-run single that allowed Wesson to increase its lead to 3-0 going into the second inning.

The teams were entrenched in a defensive struggle for the next three innings, with no runs added to the score. Wesson’s defense was on fire in the fourth inning as shortstop Brooke Jones threw a runner out at second. Second baseman Arie Douglas then threw a runner out at first base to turn the double play.

In the bottom of the fourth Wesson had the bases loaded, but Bogue Chitto’s third baseman Julianna Frazier and outfielders Kayci Beth Wallace and Cherie Savoie made plays and left the Cobras stranded on the bases.

The Bobcats gathered some steam in the top of the fifth with hits by Bayleigh Jackson, Wallace and Stevie Montgomery to get a runner across home plate. Wesson was able to stop the Bobcats from adding more points in the inning. The Cobras added another run in the bottom of the sixth with a homerun by Harmoni Ashley, but Bogue Chitto followed suit in the top of the seventh. The Lady Cobras’ defense was able to stand strong and hold the lead to end the game with a 4-2 win.

Riley Smith, the winning pitcher, struck out two batters. Heavy hitters Brinson and Ashley both hit homeruns, but Sabria Green hit 3-for-3 with two doubles and a single. Katie Westbrook also hit a double, and Vaughn, Anna Claire Crow and Catherine Wilson all had a single each.

For the Bobcats, Kayci Beth Wallace hit 3-for-3 with a double and two singles and Baleigh Jackson hit a double. Also hitting safely for Bogue Chitto were Karly Leake, Codi Leggett, Terrah Nelson, Reagan Kirkland and Stevie Montgomery.  Montgomery, the pitcher for the Lady Bobcats, walked one batter.

Wesson will travel to Hazlehurst Thursday night to face the Indians for the second matchup of the season in district play. The junior varsity game time starts at 4:30 p.m. and varsity will play at 5:30 p.m.

The JV Lady Cobras got a win over Bogue Chitto by a final score of 2-1.

Photo by Teresa Allred/Homecoming ceremonies for Bogue Chitto High School will be Friday during the halftime show as the Bogue... read more