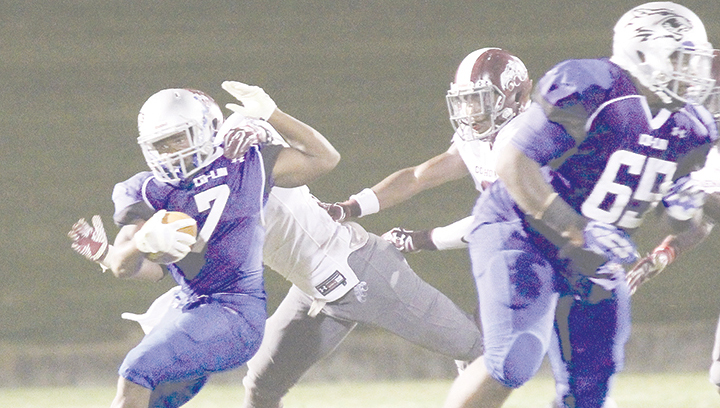 Photo by Amy Rhoads /Co-Lin running back Ladarius Galloway (No. 7) will have to have a big game tonight if his team is to get a victory.

The Copiah-Lincoln Community College Wolfpack is looking to bounce back after dropping a physical 21-7 game to Mississippi Gulf Coast last week.

The game is scheduled to kickoff at 7 p.m.

Co-Lin students are encouraged to attend for a chance to win a free one-semester transfer tuition scholarship to The University of Southernn Mississippi.

Despite the loss to Gulf Coast last week, Ladarius Galloway and DeAnthony Blake both had standout performances. Blake managed five receptions for 64 yards and a touchdown. The score came on an impressive jump ball in the corner of the endzone over a Bulldog defender. The great game will hopefully give the Jefferson County native momentum heading into Thursday’s matchup.

Galloway continues to be a staple in the Wolves’ offense. The Indianola native had 28 touches for 105 yards on the ground.

After the Gulf Coast game, Galloway now has 315 yards and 5.3 yards per carry on the season, which gives him a strong lead in the top rushing stats of the Mississippi Association of Junior and Community Colleges.

Co-Lin’s defense continued their streak of dominance last week despite the loss.

The Wolves held Gulf Coast to just 166 yards of total offense. Sophomore Colton Magee tallied up 10 tackles on the night and regained his spot as Co-Lin’s leading tackler.

Deion Pope also posted stellar numbers in the loss. The Collins native dominated from the defensive tackle position with 13 tackles including four tackles for loss.

Co-Lin enters tonight’s game in a position to get a much-needed South Division victory.

Fans can watch the action live in HD at www.colinathletics.com or on Co-Lin’s Facebook page or listen live at 104.3 FM, For score updates follow @colinathletics on Twitter.