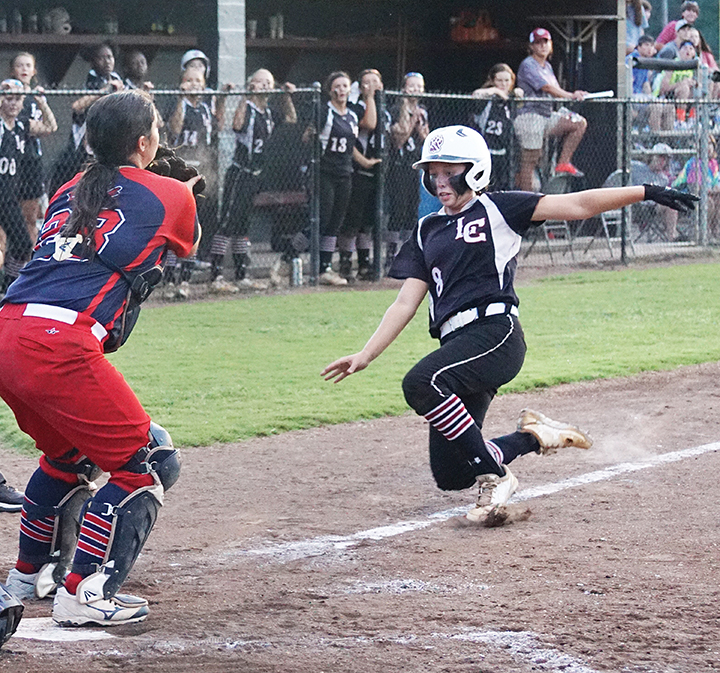 If you think slow-pitch softball is dead in Mississippi high schools, you weren’t at Lawrence County High School Thursday night.

The Ole Brook Lady Panthers and the Lawrence County Lady Cougars locked up in a 10-inning dandy, with Brookhaven ultimately pulling out a heart-stopping 7-5 win.

Ole Brook’s winning runs came in the top of the seventh, when a leadoff walk of Jada Henderson was followed by a Tia Bussey single.  When Henderson advanced to third on a fly ball to deep right, an infield throw got away from the Cougars, allowing the leading run to score. Meg Foster followed with a single to make it a 7-5 game.

Brookhaven banged out 12 hits in the game, but it was the Panthers’ gloves—specifically the glove of shortstop Macy Ziskin—that helped those final two runs stand up.

In the bottom of the 10th with a Lawrence County runner on first and none out, LCHS shortstop Sidney Pevey laced a line-drive to the left of Ziskin, at shoe-top height.  Ziskin lunged and snared it for the first out of the inning.

Next, Cougar outfielder Callie Fortenberry laced a single to left, putting the potential tying runs on base.

LCHS first baseman Skyler Speights then scorched a vicious grounder toward Ziskin. The shortstop got in front of it and stopped it and — from the ground—flipped the ball to Kat Wallace, who fired to first for a game-ending double play.

It was a dramatic ending to a game filled with drama.

Lawrence County grabbed a 2-0 lead in the bottom of the second, as Speights had a double, and Raylee Ready had a sacrifice fly.  Brookhaven bounced back with four runs in the top of the third.  Kat Wallace had a two-run double in an inning  aided by walks and two Lawrence County errors.

Lawrence County knotted things at 4-4 with two runs in the bottom of the third. Tyranesha Davis, Maddux Kirkland, and Pevey had consecutive hits.  The Lady Cougars took a 5-4 lead in the fifth after Davis singled, moved to third on a Kirkland double, and scored on a Pevey sacrifice fly.

It remained 5-4 in favor of Lawrence County until the top of the seventh, when Ole Brook forced across a run to tie the game and send it to extra innings.  Foster led off with a single and took second when the ball eluded the LCHS outfield.

She moved to third on a Jadeyn Allen single, and scored on Rileigh Allen’s sacrifice fly.

Kat Wallace led the Lady Panthers with three hits. Foster and Bussey each had two.  Allen, Ziskin, Kyla Henderson, Jada Henderson and Cheyenne Motley each had one hit. Motley also pitched all 10 innings for Brookhaven.

Lawrence County got two hits each from Davis, Kirkland, Pevey, Speights and Josey Nations. Fortenberry and Ready also hit safely.  Julianna Johnson started on the mound and pitched into the ninth inning, when she was relieved by Ashley Holden.

The Panthers face Bogue Chitto Tuesday at 6:15 p.m., with the varsity set to play at 5 p.m.

The Bobcats scored 10 runs in their game against the Stringer Red Devils Thursday to win 10-2 and take home the district championship.

“We did a great job finishing innings at the plate,” Bogue Chitto head coach Scott Leggett said. “We had several opportunities to score and came through.”

Codi Leggett and Terrah Nelson paced the Bobcats’ offensive effort with a home run and two singles each. Bogue Chitto will face Brookhaven Tuesday at 6 p.m. for their next game.

West Lincoln beat Crystal Springs 14-3 on the road Thursday to move to 6-5 overall on the season.

Morgan Newman hit a home run and a single to lead the Bears, while Anna Brooke Davis and Sara Jane Doty went 3-for-3 on the night with three singles.

The Bears’ next game will be Saturday on the road against Wesson at noon. Junior varsity will play at 11 a.m.

Photo by Amy Rhoads /Co-Lin running back Ladarius Galloway (No. 7) will have to have a big game tonight if... read more