Update: ‘Hollars’ to show in Brookhaven next week 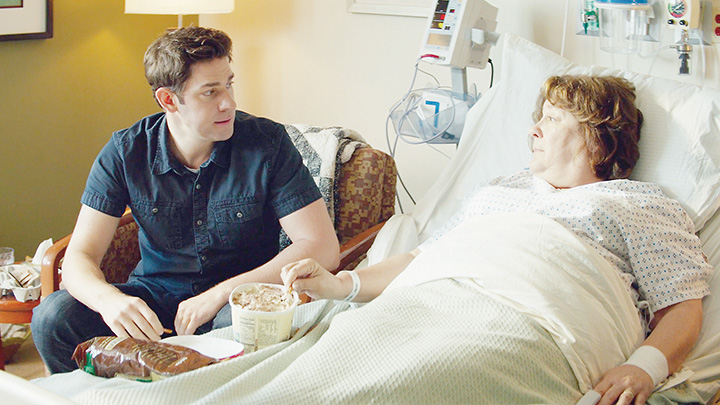 Photo courtesy of Sony Pictures Classic/John Krasinski (left), who stars as John Hollar in the movie “The Hollars,” sits with Margo Martindale , who portrays Sally Hollar, in a King’s Daughters Medical Center hospital room during a scene shot in 2014.

“The Hollars” will be playing in Brookhaven by the end of next week, officials said.

Regal Entertainment Group, which operates the UA Westbrook in Brookhaven, decided that the movie that was filmed here should play here, said Tom Rice with Sycamore Pictures, one of the movie’s producers. Another producer, “The Office” actor John Krasinski also directs and stars in “The Hollars.”

An executive with Sony Pictures said Regal will be able to open in Brookhaven Sept. 30, he said. It’s not known yet how long the movie will play or its showtimes.

Rice said many people contacted theater management and voiced their displeasure at not being able to see the movie that was filmed in Lincoln County. It’s in 150 other Regal and United Artist theaters nationwide, but wasn’t on the schedule to play in Brookhaven.

“I’m so thrilled that the people of Brookhaven are supporting this film in such a way that changed Regal’s mind,” Rice said. “I’m really thrilled that this film will be there next week, and if everyone in Brookhaven loves this movie just half as much as my parents do, we’ll be in good shape!”

The movie is about a dysfunctional family dealing with a terminally ill mother.

Krasinski plays the main character John, a graphic novelist living in Manhattan with his pregnant girlfriend (Kendrick) who is a pet-clothing designer.

Because mom Sally (Martindale) is in the hospital, many scenes were shot at King’s Daughters Medical Center, which is Knight County Hospital in the film.

The movie includes several shots of the hospital lobby, the operating room and a hospital room.

“KDMC is very excited that ‘The Hollars’ will be at Westbrook Cinema,” said hospital spokesman David Culpepper. “With so much of the film shot at KDMC and in Brookhaven, it is a great opportunity for those who have parts in the film to be able to watch here at home with family and friends.

“Please let the management at Westbrook know that you appreciate them showing the film and urge them to add dates to the showing.”

Rice, in a story published in today’s The Daily Leader, asked the people who wanted to see the film locally to let the theater know.

“John and I and Sony have done all we can to force it, but ultimately I think people calling the theater and showing a demand for the film is going to be the only way to get it there,” he said.

Rice has been working with Sony Pictures Classics to get the movie to Westbrook.

“The people of Brookhaven feel angry and slighted,” he said in an email to Sony. “We should have been rolling out a red carpet there. They feel incredibly disrespected, and that’s really upsetting to me.”

Rice said Regal did not offer a reason for its prior refusal to show “The Hollars” in Brookhaven.

He suggested in the article published today that those who want to see “The Hollars” in Brookhaven go to the theater and request it.

“I would encourage everybody to go by this theater and let them know they want to see this movie,” he said. “The only way you change Regal’s mind is for Regal to understand the mind of the community.”

It must have worked. Rice posted on The Daily Leader’s Facebook page today: “The people of Brookhaven made an impact. Regal just agreed to open the film next Friday, Sept. 30. Great work. The power of the people!”

Lincoln County Supervisors may get rid of some of the red tape home and business owners must cut through to... read more