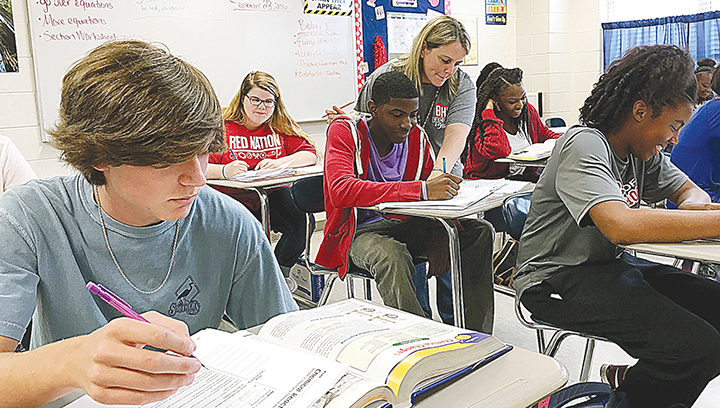 Teachers in southwest Mississippi are anything but average, except when it comes to their salaries.

The average teacher salary in the state is $43,308, according to figures compiled by the Mississippi Department of Education for the 2014-2015 school year. The 192 teachers in the Brookhaven School District earn a tad higher with an average of $43,967 annually, while in the Lincoln County School District, it’s just a bit lower. The 193 teachers there earn an average annual salary of $43,120, according to the figures included in the annual report by State Superintendent Carey M. Wright, which she released earlier this year.

But those figures are affected by several factors, explained Brookhaven Superintendent Ray Carlock. “Salaries are based on the state salary schedule for each year,” he said. “We don’t really have a choice.”

In other words, school districts can’t legally base teachers’ salaries on what they think they’re worth, or they’d be making much more.

“It’s impossible to measure the worth of a professional educator,” said Lincoln County Superintendent Mickey Myers. “Comparably speaking, salaries for teachers have lagged woefully behind other positions requiring commensurate degrees and training, but the demands upon teachers and the challenges they face have certainly escalated.”

The highest average salary for teachers came from the Pascagoula-Gautier School District, where the 566 teachers employed earn an average of $48,926 annually. The lowest is in North Panola Schools where 114 teachers earn $38,087 on average annually.

Neighboring districts were right there with Brookhaven and Lincoln County, according to Wright’s report.

The Mississippi Adequate Education Program sets a salary schedule for school districts to abide by. According to the 2014-15 schedule, starting pay for a teacher with a bachelor’s degree is $33,390. That base pay grew to $34,490 after legislators passed a $1,000 raise for teachers. The pay goes up with advanced degrees such as a master’s degree or doctorate and/or with duration of career.

Teachers can supplement their salaries by driving buses, teaching after-school programs and coaching.

Educators don’t go into teaching to get rich, said Loyd Star Attendance Center Principal Robin Case. “I dare say teaching is much more of a life calling than a job to those of us who have chosen this path,” she said.

Case taught for six years before she became an administrator a decade ago. “Our love of children and of education partner beautifully in this profession we call ‘teaching.’ With an honest heart, I can tell you that teachers don’t do it for the money.  We chose to be educators because we truly want to make a positive, impacting difference in the lives of young people.”

Case added that the average pay for teachers doesn’t take into consideration the extra personal time teachers invest in their students’ education. “Many people have the misconception that teachers only work nine months a year. Nothing could be further from the truth.  Educators work year-round, planning and prepping for the next day, week, semester or school year.

“Teachers are called upon to work duty at ballgames and many school related functions well beyond the 7:30-to-3:30 schedule.  They do not get overtime of any form or fashion.

“Currently, the amount of paperwork required from both state and federal levels is overwhelming.  And all this is in addition to the time teachers spend establishing lesson plans and then actually delivering them in the classroom.”

Myers would like to see MAEP raise teachers’ base pay.

“I visit our campuses frequently and I am inspired by the level of commitment and expertise of the vast majority of our classroom instructors and staff,” Myers said.

Carlock said the caliber of teachers in his district is astounding.

“We definitely have a lot of experienced teachers with numerous years,” he said.

He said that’s important as the district tries to improve its students’ state test scores and increase graduation rates. “We have a lot of experienced teachers here who have classroom management skills, which is helping us to get better,” Carlock said. “All of our faculty and staff, which includes teachers, are great people. That’s one of the reasons so many teachers are proud to be Brookhaven graduates. We are very thankful for all that experience. That’s what helps a school district run smoothly and really helps us serve the community.”

In comparison to the rest of the country, including neighboring states, the average teacher salary in Mississippi remains near the bottom.

Teachers in the Magnolia State make less on average than every state in the country besides South Dakota. Going back 10 years, Mississippi and South Dakota trade places for second lowest salary in the country, according to numbers compiled by the National Center of Education Statistics.