Copiah-Lincoln Community College’s  Joseph Dendy won a two-hole playoff recently o take medalist honors in the second MACJC of the season held at North Creek Golf Course in Southaven. The sophomore from Brandon was tied with Wyatt Adkison of Mississippi Gulf Coast at 3-under 141 (69-72) at the end of regulation. 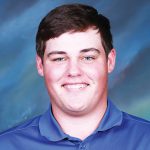 The Wolfpack finished in second place behind Mississippi Gulf Coast in the with a two-day team total of 584, 10 strokes behind the Bulldogs.

“Our guys played good but left several strokes out there that are very fixable,” said Co-Lin head coach Ronny Ross.  “I like where we are right now as far as competing goes, and our sophomores are stepping up and playing some solid golf and our freshmen are right there with them.”

After the first day of play, the Wolves trailed Gulf Coast by just eight strokes. Co-Lin finished four under par while the Bulldogs shot a blistering 13 under. Co-Lin’s Brandon Blakney led the tournament after the first round with a 67. Cole Arseneault and Matthew Scoville rounded out Co-Lin’s scorecard with a 72 and a 74 respectively.

Day two brought very gusty winds that hindered everyone. Dendy fought through the difficult conditions to back up his three under par day one performance with a solid 72. Blakney finished his second round at 77, which gave him a fourth place finish and a total of 144. Arseneault posted a 75 in the second round to give him a two-day total of 147. Scoville capped of the Wolves scorecard with a 75 to bring his two-day total to 149.

“I think the wind was the biggest factor in the scores getting higher,” said Ross. “The greens were very fast and the holes were tight”

The Wolves return to competition on Saturday for the third event of the year at Eagle Ridge Golf Course in Raymond. Keep up with the action by following colinathletics on Twitter.

Photo by Laurel Leader-Call/Ole Brook running back Kenneth Dixon will need to continue to produce if the Panthers hope to... read more