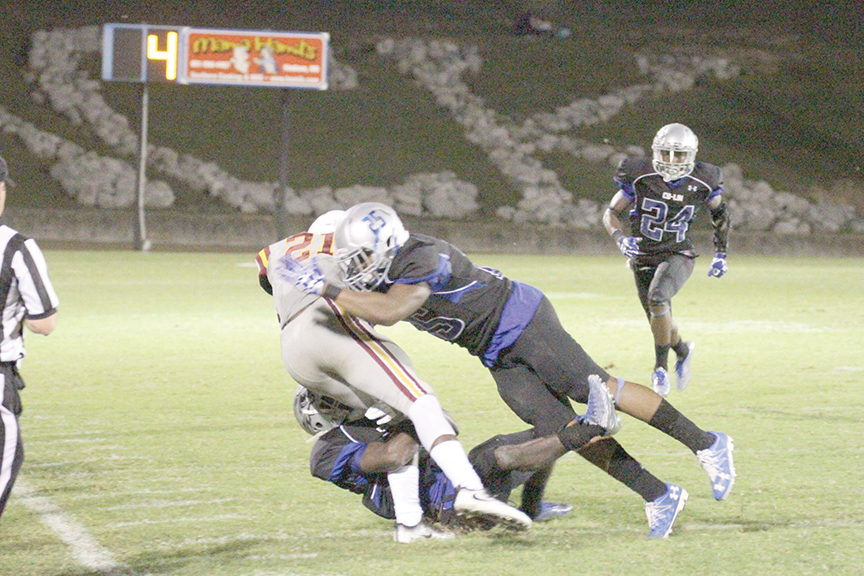 Submitted photo/Co-Lin defensive back Rhoy Williams wraps up a JCJC runner in their game last week. The Wolves will face East Central in Stone Stadium today at 7 p.m.

The Wolves upset the then-ranked No. 6 JCJC Bobcats in Stone Stadium 27-22 last week in thrilling fashion.

East Central is also coming off a big South Division win as they defeated Mississippi Gulf Coast in Decatur 41-28.

The Co-Lin Counseling Center will host a senior tailgate party for local high school seniors and their families at 5:30 p.m.

Hotdogs, hamburgers, chips, and drinks will be provided. The game can be viewed live in HD  at colinathletics.com or on the Co-Lin Facebook page. Fans can also listen to the action live at 104.3 FM.

The Co-Lin offense was firing on all cylinders last week after a disappointing performance two weeks ago against Mississippi Gulf Coast.

Redshirt freshman quarterback Dominic DeLira led the Wolves with confidence throughout the game as he racked up 264 passing yards and three touchdowns.

DeLira’s main target was freshman Nero Nelson. Nelson had a breakout performance as he accumulated 122 receiving yards, including a 64-yard touchdown grab. The freshman also gained 117 yards on special teams to give him a total of 239 total yards.

Michael Graham, a sophomore middle linebacker, led the Wolves with 12 total tackles including one sack for a 16-yard loss.

Fellow linebacker Colton Magee had a great game also as he tallied eight total tackles. Magee currently leads the Wolves with 34 tackles on the season.

Tonight’s contest will pit the Wolves against yet another formidable opponent in the Warriors.

After starting the year with losses to Holmes and Northeast, East Central has responded with wins over Pearl River and Mississippi Gulf Coast.

Gulf Coast beat the Wolves by forcing turnovers and playing stout defense. Co-Lin remedied their turnover issues last week and was able to make big plays in clutch moments against the Bobcats.

However, the Bobcats and the Bulldogs both showed an ability to control the line of scrimmage and run the ball against a highly touted Wolfpack defense.

The Bulldogs’ running back T-Rod Daniels and JCJC’s Scott Phillips each had over 100 yards rushing against Co-Lin.

The Wolves will face yet another solid running game tonight led by Dwayne Barnett Jr. The freshman has 333 yards and five touchdowns on the year. Warriors’ quarterback Dominic Marino is a threat to tuck-and-run as well. The signal caller has racked up 245 rushing yards to go along with 721 yards and 11 touchdowns passing.

The Saints could still go marching into playoffs

When some people wake up in the morning, the first thing they do is turn on the news. I personally... read more