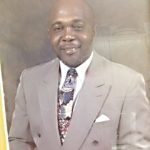 He was born June 5, 1952, to the late L.C. Williams and Eloise Thompson Williams. Mr. Williams grew up in Brookhaven and later in life moved to Jackson. He graduated from Alexander High School in 1970. He joined the U.S. Navy on Dec. 18, 1970, and retired after 22 years of service in December 1992. After retirement form the U.S. Navy, he worked with the Jackson Police Department and retired after 10 years. He decided that retirement was not for him, so he started as a security guard for Wackenhut Security. He finally decided to retire in June 2014.

Preceding him in death were his parents, and a brother, Ronnie Coleman.