Mom and daughter bring taste of New Orleans to Brookhaven 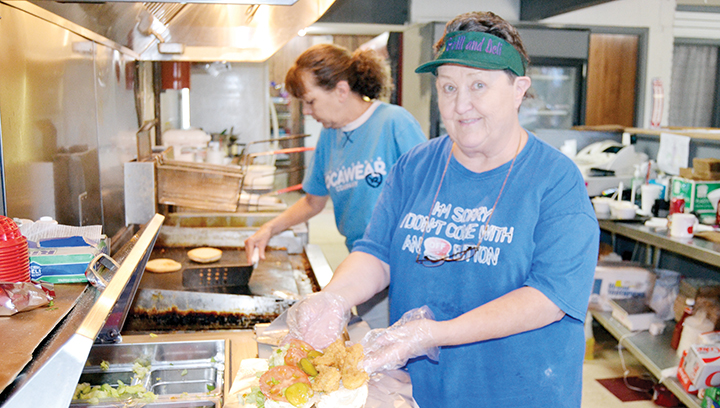 Deborah Blackshear wants to give Brookhaven a taste of New Orleans.

Blackshear, 50, grew up waiting tables at her grandmother’s grill on Tulane Avenue. It’s where the Belle Chasse native learned to cook and treat customers right.

Her mother, Lynda Williams, owned a convenience store that sells po’boys and burgers in Monticello, but she was itching to move to Brookhaven to be closer to Blackshear and her younger sister, Rhonda Perez, in Brookhaven.

The “Golden Girls” of Cajun specialties opened Mardi Gras Grill just shy of two weeks ago and business has been good.

“We wanted to share our style of food with everybody,” she said.

Blackshear wants to eventually buy the little yellow building on Brookway Boulevard next to KFC. The group is serving up homemade gumbo and jambalaya daily, along with a variety of burgers and po’ boys and some outrageously good bread pudding.

It’s a mom and mom operation.

Pop was James Williams Jr., Blackshear’s stepfather, and the reason her mother moved across the Mississippi River 20 years ago. Blackshear moved here about eight years ago with her son.

Mardi Gras Grill keeps her 70-year-old mother hopping. Williams can mostly be found flipping quarter pound patties on the grill or stuffing mounds of fried shrimp and lettuce and tomato inside some flaky Gambino’s French bread.

The shrimp po’ boy is their biggest seller so far.

“We use quality ingredients and we get that Gambino’s French bread crispy warm on the grill and put it together on the grill while it’s hot,” she said. “We fix it the way we like to eat. We like lots of dressing and lots of shrimp. If we won’t eat it, we won’t serve it.”

The list of po’ boy fillings is impressive and lengthy. It’s a hard choice to make. Besides the fried shrimp, they’ve got oyster, catfish, crawfish, soft-shell crab, roast beef, ribeye, ham and cheese and Philly steak with peppers and onion. The seafood can also be plattered with fries, coleslaw and a pair of hushpuppies.

Then there’s the build-your-own burger. They butter the bun and toast it on the grill while the burger sizzles beside it. It’s customer’s choice for the toppings: lettuce, tomato, pickles, raw or caramelized onion, sautéed mushrooms, bacon, chili or fried egg, topped with the melty goodness of American, cheddar or pepper jack cheese. Or all three.

A few brave souls have ordered one with everything. “We drag it through the garden,” Blackshear said, laughing, using some short-order chef slang.

Blackshear’s partial to her mama’s gumbo. It’s stuffed with chicken and sausage in a shrimp stock. The jambalaya is, too.

Both are the daily specials, served in 8-ounce bowls or doubled for the 16-ouncer. It’s the food Blackshear grew up eating.

“That’s what she always cooks,” she said. “She doesn’t measure nothing. Neither do I. We just throw it in the pot until it tastes good.”

It’s Williams’ recipe for the bread pudding, too. It’s served warm and drowning in a decadent pecan praline sauce.

She’s been making double batches lately to match the demand. Sometimes a bit is left over, but not often.

“We just bring it home and eat it,” Blackshear said.

Unless her 16-year-old son and his friends are home, she said, laughing again as she recalled her stash of dessert recently disappearing from her fridge before she could taste it.

In the small restaurant, where the half dozen booths and tables are separated from the kitchen only by a prep table, it’s easy to greet customers as they come in. Blackshear grinned at a couple Friday and handed them each a paper menu with the Mardi Gras Grill offerings. As they looked it over, she handed a sack to a hungry customer who had been waiting for two shrimp po’ boys.

“Spread the word about us,” Blackshear told him.

“I did. I told one of my girlfriends,” he said.

“One of them,” Blackshear and a shocked Williams exclaimed in unison.

Mother and daughter exchanged glances, not too sure if they believed him, but happy to get more word-of-mouth advertising.

They enjoy joking around with their customers.

“We love to talk. That’s New Orleans. We never meet a stranger,” Blackshear said. “We like to put a little South in everybody’s mouth.”

The Mardi Gras Grill menu is a work in progress, and Blackshear plans to add to it as business picks up. She’s thinking about featuring crab cakes soon.

She also wants to get an app for the restaurant so customers can look them up on smartphones and tablets.

“They can see what’s available, order it, pay for it and drive through the window and pick it up,” she said.

Some of the nurses at King’s Daughters Medical Center are grabbing their tissues and big boxes of popcorn this weekend... read more