‘The Hollars’ screening a success 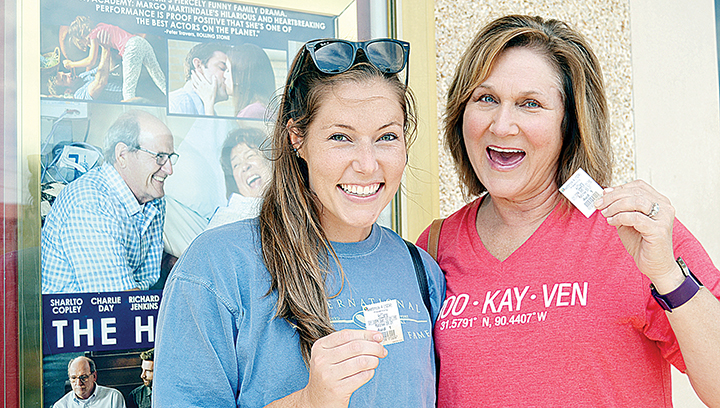 Photo by Donna Campbell/Abby Downing (left) and her mother Nancy Fisher, bought their tickets for “The Hollars” at UA Westbrook 4 Saturday and were waiting in line to see the movie.

After all, she’d seen the 6-foot-3 actor in person during a break from filming “The Hollars” at King’s Daughters Medical Center two years ago. Now she was ready to see him larger than life at the UA Westbrook 4.

“We wanted to see it since so much of it was set here,” Fisher, of Brookhaven, said.

She and her daughter, Abby Downing, bought their tickets for the 1:30 p.m. show Saturday and giggled like school girls as they waited to go inside the theater.

Fisher recounted her brush with the actor, who also directed and produced the movie.

“I was at a CPR clinic at the hospital,” she said. “I was watching for him out the window. I knew he was there somewhere.”

When she spotted him, she ditched the class and did what any fan would do — she asked for a selfie.

“One of his people took it for me with my phone,” she said.

She posted it on Facebook immediately to prove she’d met the star, who played Jim Halbert on “The Office” for eight seasons.

Many of the scenes in the movie were shot at KDMC, which is called Knight’s County Hospital in the PG-13 movie.

“It will be fun to spot some locals,” Fisher said.

The women said they were glad UA Westbrook decided to show it in Brookhaven. “We’ve heard nothing but good things about it,” Downing said.

“The Hollars,” which also stars Anna Kendrick, Margo Martindale, Mary Elizabeth Winstead and Richard Jenkins, is about a dysfunctional family dealing with a terminally ill mother.

Mom and daughter bring taste of New Orleans to Brookhaven