Trooper Mitchell Chappell, of Brookhaven, an officer with the Mississippi Highway Patrol injured Sept. 11 on his way to a traffic accident, has been moved from a Jackson hospital into rehabilitation center. 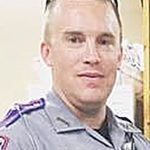 “Chappell has been moved to a rehab facility to start on an aggressive physical therapy,” MHP spokesman Cpl. Brandon Fortenberry said. “This will be one more step forward to getting the physical therapy he needs to get back on his feet.

Chappell, 27, and his wife, Amanda, live in Brookhaven, where she’s a home healthcare nurse. Fortenberry said out of respect for the couple’s privacy, he won’t say where the rehabilitation center is located.

The trooper had been in the critical care unit of University of Mississippi Medical Center for treatment of his injuries, which included a fractured  skull on the back of his head, Fortenberry said.

Chappell was on his way to a traffic accident in Bogue Chitto when his car apparently hydroplaned in the northbound lane of I-55 near mile marker 31. Dispatchers lost radio contact with him, and he was found soon after unconscious in the restraints of his cruiser, which had collided with a patch of trees, Fortenberry said.

All three cruisers were totaled, Fortenberry said. The other two troopers, who have not been identified, were not injured.

Zach Harveston, a communications officer with the Lincoln County Sheriff’s Office and MHP, started a gofundme account for his friend soon after to help with expenses the family will incur while Chappell is in the hospital.

Donations can be also be made to the “Benefit Account for Mitchell Chappell” at any branch of Regions Bank.

Harveston and others have also designed T-shirts which will they’re selling. The blue T-shirts have the Troop M MHP logo on the front and “Prayers for Chappell – M18” on the back with a larger MHP logo over an outline of the state. Shirts are $15 for short sleeve and $20 for long sleeve and come in sizes youth small to adult 4X. The first of three batches of orders went out Sept. 23. Harveston will be collecting orders until Friday for the second batch at the following locations:

No one injured in explosion at McKenzie Metals

No one was injured in an explosion at McKenzie Metals on Saw Mill Lane. The explosion, which caused a fire... read more