No injuries in scrap yard explosion 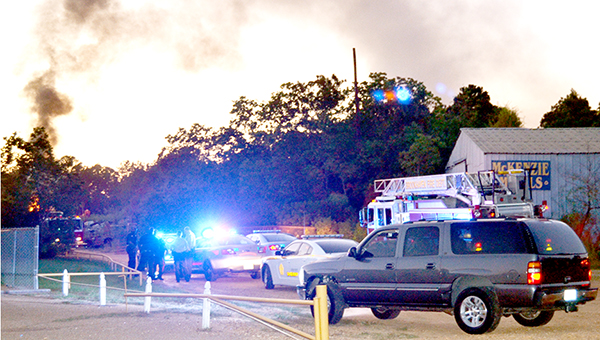 Photo by Donna Campbell/No one was injured in an explosion at McKenzie Metals on Saw Mill Lane. The explosion, which caused a fire in a metal trailer used to haul scrap metal, occurred about 6:40 p.m. Monday.

No one was injured at an explosion Monday at McKenzie Metals that shook buildings and rattled windows at homes and businesses nearby.

The explosion, which happened at 6:40 p.m., caused a fire at the scrap metal business.

Large, black plumes of smoke could be seen for miles.

“One of the workers was packing items and something under the pile exploded,” Brookhaven Police Chief Bobby Bell said.

BFD Capt. Jeff Ainsworth said the fire was in a trailer the owner used to haul scrap metal. Firefighters were planning to use foam on the blaze, but the owner told them it could burn out on its own.

“He said it would be a waste of water and foam,” Ainsworth said. “It’s up off the ground in a metal trailer.”

A BFD unit remained at the scene until the fire burned out, he said.

The explosion surprised people nearby.

“All of my neighbors were outside looking around trying to figure out what happened,” said Tammie Brewer, who lives in the Pearlhaven community about a mile away. “Shook all our houses, and it was a very loud boom.”

David Bonson, a tool and die maker at L&S Tools just down from McKenzie Metals, said he was walking into their shop when he heard it.

“Of course, I jumped because I thought someone had kicked the door, until the whole building shook. It shook the windows,” he said. “It rocked our building.”

Bell said calls began to come into dispatch immediately after the explosion.