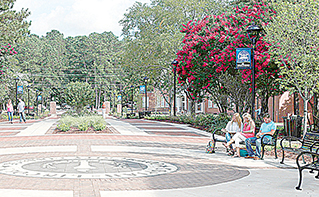 Photo by Johnny Smith/Students visit recently on one of the benches in the pedestrian corridor at Copiah-Lincoln Community College. A ribbon-cutting ceremony will be Thursday at 2:30 p.m.

Four years after planning for a pedestrian corridor on the Copiah-Lincoln Community College campus began, officials will cut a ribbon officially opening it to students and staff.

A ribbon-cutting ceremony will be held Thursday at 2:30 p.m. at the center of the Co-Lin campus. Wesson Mayor Alton Ricks, Co-Lin President Ronnie Nettles, Board of Trustees Chairman Eugene Bates, Student Government Association President Katie Grace Culpepper and Transportation Commissioner Dick Hall will be on hand for the ceremony.

The project will make several health, fitness and recreational areas and activities on campus safe and easily accessible to the Wesson residents and to the college population.

“With many campus activities now being connected to the city by pedestrian walkways, the project greatly increases safety for citizens of Wesson and Co-Lin students and staff,” said Michael Flood, public information officer with the Mississippi Department of Transportation.

Improved lighting and extensive landscaping was also a part of the project with over 4,500 plants and tress being added.

The Transportation Alternatives Project was funded by a Federal Highway Administration grant and appropriated through MDOT with a 20-percent local match from Co-Lin, he said.

Nettles said the project started on the first day of class in the fall of 2015.

Along with improving the school’s aesthetics, the new walkways comply with the Americans with Disabilities Act, making the school more accessible, he said.

Co-Lin Director of Facilities Planning Jeff Posey wrote the grant for MDOT and WGK engineered the project, which cost about $1.2 million. The grant covered about $1 million.

The corridor cuts through the center of the Co-Lin campus. Trees shade part of the walkway, and it also features seating areas for students.

“It gives them a very nice area in the center of our campus to enjoy,” Nettles said after construction was completed.

Nettles said that, while the design is new, it also maintains old features that are recognizable in the school, including a restored entrance that is reminiscent of the campus in the 1930s.