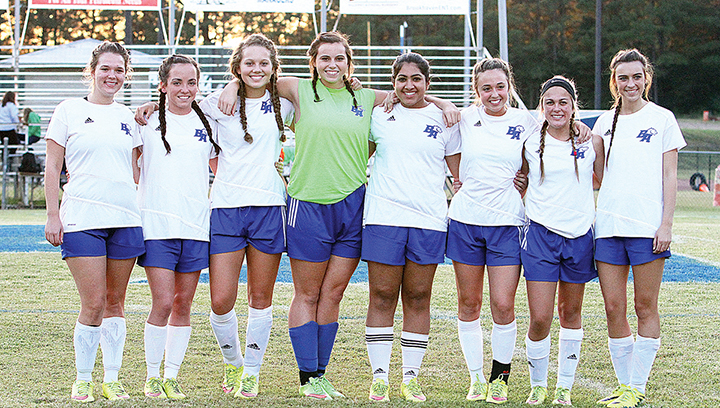 On the night dubbed as senior night, they ended their careers on a high note by defeating Copiah Academy 2-1.

The Lady Cougars were determined to make it a special night for their seniors and they did not disappoint before a crowd of their students, family and friends.

The win breaks a long streak of losses to a very good Copiah soccer team and was a fitting end to a great season for BA.

“I am happy for the seniors, especially tonight. These girls put a lot of work in the last few years and when they play with the energy they had tonight they are tough to beat,” Cougars’ head coach Mark Leblanc said.

Things did not start off great for the Lady Cougars in their final game of the year, though, as the Colonels scored in the opening five minutes of the game. After the shaky start, BA took control by pressuring the back line of Copiah the remainder of the night.

With a few minutes left to play in the first quarter, sophomore defensive midfielder Natalie Rials took a 25-yard penalty kick that deflected off of Copiah’s goalie and senior co-captain Smith was there to put it in the back of the net to tie the game at 1–1.

“Natalie has been scoring goals and making things happen all year on our penalty kicks,” Leblanc said. “She has a strong, accurate leg and Harley was in the right position to score when the ball was deflected.”

In the second quarter, the Cougars would score what would be the deciding goal.

Mills, the Cougars’ senior striker, was able to beat the Copiah goalie to a deflected shot and score the game-winner for the Lady Cougars. The second half was hard fought, but BA’s defense, led by senior co-captain Wilson, junior Madelyn Ogelsby and goalie Mckinley Evans would not let Copiah score again.

“It was a fitting end to a good season,” Leblanc said. “The girls really took it to Copiah and wanted the victory more in my opinion.”

Mills, the team’s leading scorer for the past two years, finished 2016 with 18 total goals.

“We will miss this group of seniors, they are responsible for giving our girls pride in this soccer program. They competed in every single game and created a winning environment that can hopefully be continued next year,” BA’s head coach said.