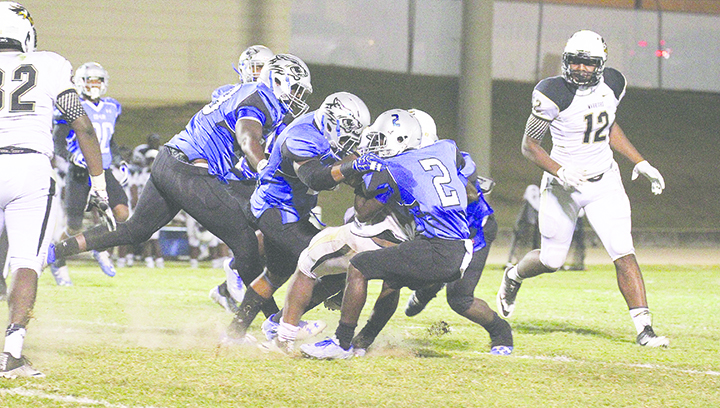 Photo by Lucas Calvert/Freshman Isaiah Swopes and a host of Wolves wrap up an East Central running back in a 34-23 win over the Warriors last week.

The Copiah-Lincoln Community College Wolves (3-2, 2-1) travel to Raymond to take on the Hinds Eagles (1-4, 1-2) tonight after an explosive come from behind victory over East Central. The Wolfpack rattled off 27 unanswered points in the fourth quarter to defeat the Warriors 34-23.

Hinds enters the South Division matchup coming off a 34-0 loss to Mississippi Gulf Coast in Perkinston. The Eagles defeated the Wolves last season 33-26 to narrow Co-Lin’s lead in the all-time series record to 36-35-3.

Kickoff is scheduled for 6:30 p.m. Fans can listen to the action live at 104.3 FM or follow colinathletics on Twitter for score updates.

Wide receiver Nero Nelson played a phenomenal game for the second week in a row, as he helped lead the Wolves to victory last week. The freshman had 239 all-purpose yards in the win, including a 54-yard touchdown pass. The Hollandale native also returned a punt for a touchdown to help shift momentum into Co-Lin’s favor.

The Wolves’ defense has been a dominating factor week in and week out this season.

The Wolves performed solidly through three quarters of play before several forced turnovers and stellar plays completely turned the game in the fourth quarter. In the final quarter of play Co-Lin posted four interceptions, two of which were returned for touchdowns.

Sophomore cornerback Isaiah Swopes led the way for the Wolves. The Ocean Springs native finished the night with 10 tackles, a fumble recovery, two interceptions and one touchdown. Montez Sweat brought down his first interception of the season during the game as well. The redshirt freshman barreled his way 12 yards to the end zone for a Co-Lin score after the one-handed grab. Sophomore Colton Magee, the Wolves’ leading tackler,  finished the night with eight total tackles. The performance brings his total to 42 on the season.