The hard work during the season is being rewarded for Brookhaven Academy senior centerfielder and second baseman Anna Grace Covington. 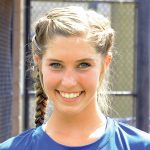 Convington was recently selected to represent BA in the Mississippi Association of Independent Schools All-Star Game.

The senior finished the season with a .238 batting average with five doubles and posted a .438 on base percentage. Her fielding percentage on the year was .921.

BA head coach Becky Flowers said she was an integral part of the  Cougars’ young  team.

“Anna Grace has been solid for the three years I have been coaching here,” she said. “Her numbers from this year are not as high as normal, but she is a utility player for our team and talented enough to play infield or outfield.”

Flowers said she is unsure of Convington’s plans after graduation, but she believes the senior can do whatever she sets her mind to.

“Being the only senior on our varsity team put a lot of pressure on her and being surrounded by five junior high players required her to step up defensively and offensively,” Flowers said.

After the south AAA and AAAA combined this year, the selection field for the game was raised from 12 to 18 players. The all-star game is set to take place Wednesday at 2 p.m. at Jackson Prep.