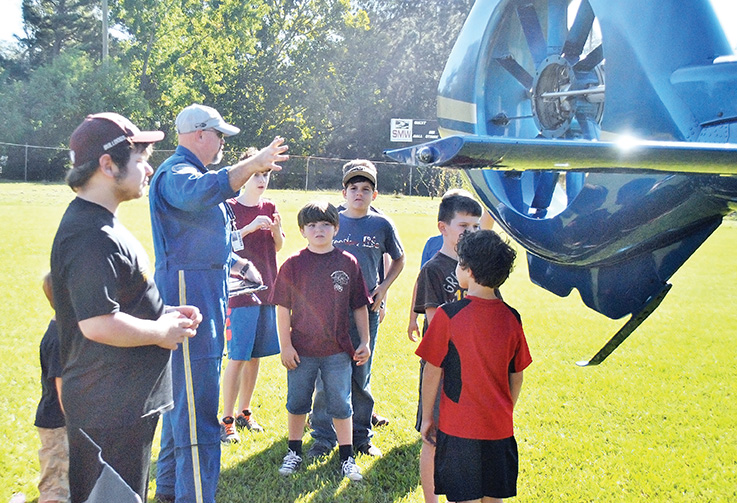 Photo by Aaron Paden/Students from The Reading Nook took a field trip Thursday to the Exchange Club Park to learn about the LifeFlight 4 medical helicopter.

It’s not every day that a group of children in Brookhaven get the chance to see a helicopter up close.

When the 28 students from The Reading Nook took a field trip Thursday to the Exchange Club Park, the pilots and paramedics of the LifeFlight 4 medical helicopter did more than just drop down from the sky and give a presentation.

The kids were all given a chance to sit in the cockpit, and the LifeFlight crew had no problems popping the hood and talking shop with the students.

LifeFlight 4, based in Brookhaven, provides quick emergency medical transportation for any hospital within 100 miles.

Millie Porter founded The Reading Nook in 2013 as a tutoring center for children with dyslexia, but it’s since expanded into private school for children with learning disabilities, though they continue to provide tutoring services. Porter said the school will also offer speech therapy beginning in January.

Porter worked for five years in the public school system as a speech therapist before she made the decision to set out on her own. That’s something Porter said has been very rewarding for her.

“I knew some kids were having problems that were not speech related,” she said. “There was a need for it. Parents didn’t know what to do. I put myself on the line for that.”

According to the National Institute of Neurological Disorders and Stroke, dyslexia is a brain-based disability impairing a person’s ability to read, despite having average or greater intelligence.

According to the NINDS, dyslexia can be an unpredictable disorder that requires an educational environment tailored to the child, but the outcome is generally good when the disorder is diagnosed early.

Deadline to register to vote is Saturday