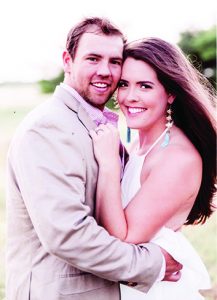 She is the daughter of Mr. and Mrs. Richard Perry Ellis Jr., of Dallas.

She is the granddaughter of the late Mr. and Mrs. John Harrison, of Lexington, Texas, Perry Ellis, of Dallas, and the late Mrs. Perry Ellis.

He is the grandson of Mr. and Mrs. Cortez Byrd, of Brookhaven, and Mr. and Mrs. Waddell Stewart, of Columbia.

The bride-elect is a 2011 graduate of First Baptist Academy in Dallas and a 2015 graduate of the University of Mississippi in Oxford where she received a Bachelor of Science in elementary education. She is currently employed with Brookhaven Academy as a junior high English teacher.

The prospective groom is a 2010 graduate of Brookhaven Academy and a 2015 graduate of Mississippi State University where he received a Bachelor of Science in forestry. He is currently employed as a registered forester in timber procurement and realtor.

The couple will exchange vows at 5 p.m., Saturday, Oct. 29, 2016, at Sanders Hitch Ranch in Fort Worth, Texas. A reception will follow.

Gregory and Rita Smith, of McCall Creek, announce the engagement and approaching marriage of their daughter, Melody Marie Smith, of... read more