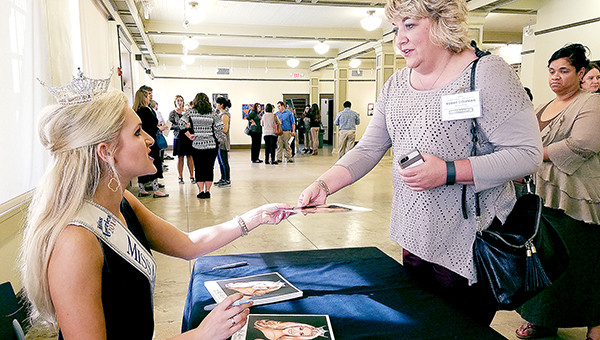 Miss Mississippi Laura Lee Lewis told a group of educators that she was called ugly as a child and urged them to find the beauty in the children they teach and make each student feel special.

Lewis, 23, spoke at the annual Lamplighters Conference Friday at a prevention conference at Mississippi School of the Arts. The conference is sponsored by the Mississippi Community College Academic Dean’s Association and hosted at a different institution each year.

Each of the 15 community colleges in the state nominates instructors to attend the conference. Since the conference serves as a reward for participants, they are treated to unique experiences and fun outings along with networking opportunities.

Meeting Lewis was such a reward.

Lewis told the group of about 45 educators that she was born with a facial deformity which caused her chin and lower jaw to overdevelop, while the upper portion of her face under-developed.

“Kids can be mean. Very mean,” said the Brookhaven native who just last month made the top five in the Miss America pageant. “They let me know I looked funny.”

Some of her classmates called her horse face. Their words stung.

Lewis said she felt alone and miserable in school and begged her parents, Mark and Lorin Lewis, to let her study at home.

Former Brookhaven Elementary Principal Pam Fearn changed Lewis’ life. The principal, now retired, took the young girl aside and told her she could do anything.

“Reach for the stars. Don’t listen to the negativity. Make a difference,” she told her.

“She told me I had value, that I was special,” Lewis said.

“I made that my life’s work,” she said. “Mentoring is so important. It changed my life.”

Lewis urged the educators to seek out children who need extra encouragement and spend time with them.

“Someone might be going through something you can’t see,” she said. “Mentor them all and make them feel special.”

At MSA, the educators were treated to performances by Lewis, who sang selections from two Barbra Streisand songs, and from drama, dance and music students from the performing arts high school.

She sang a portion of “Piece of Sky,” which she had performed at the Miss America pageant.

Lewis recalled her thoughts just before singing on the televised program which was seen by millions of viewers.

“In my head, I was screaming and jumping and was ready to pass out, she said. “On the outside, I hope I appeared cool, calm and collected.”

The group was treated to dinner and a show Thursday night. Lowell Martin and Daniel Ethridge, instructors at Meridian Community College, enjoyed their time in Copiah and Lincoln counties. They were part of the entourage who saw the Brookhaven Little Theatre’s presentation of “To Kill a Mockingbird,” Thursday night at The Haven.

”It was just a fantastic production,” Ethridge said. “First rate.”

Approximately $200,000 in state appropriations were cut from Copiah-Lincoln Community College’s budget and the blade could still be swinging. President... read more