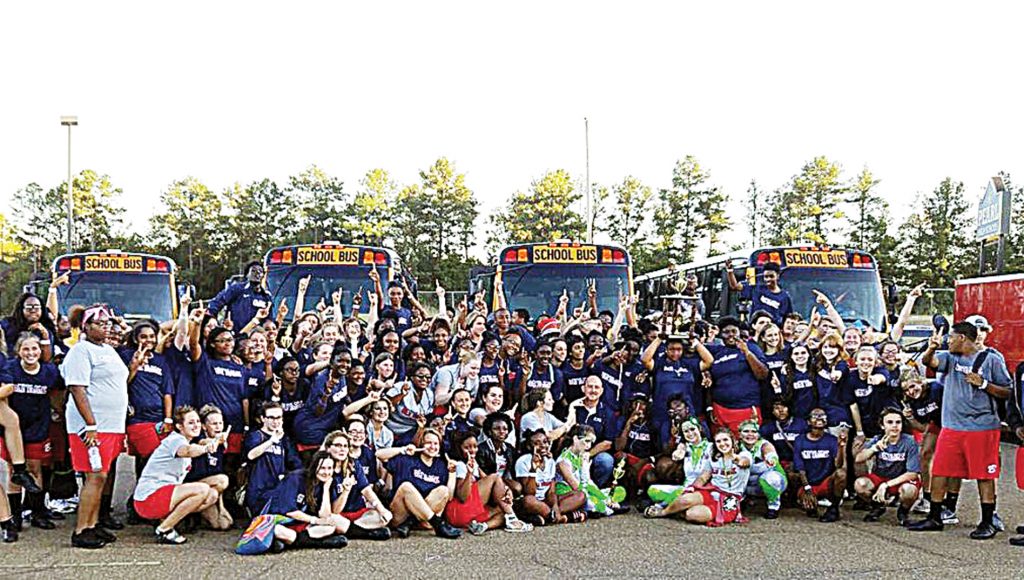 Photo submitted/Band director Clay Fuller, center, and the Pride of Ole Brook Band recently earned a superior rating at the Mississippi High School Activities Association Bandmasters evaluation. The band was invited to participate in the MHSAA competition Oct. 22 in Pearl.

Sweat and tears turned to sweet music and superior ratings for the Ole Brook Panther Band.

“We were expecting to do well,” Fuller said. “It wasn’t a big surprise.”

However, what was a surprise was that the band’s performance at the evaluation earned them an invitation to participate in the MHSAA 5A marching competition Oct. 22 in Pearl.

The MHSAA-Mississippi Bandmasters Association State Marching Band Championship is an annual event to select the best high school band in each class in the state of Mississippi, Fuller said.

They’ll compete with 15 other bands in the 5A class. Only one will be named champion. “This is for bragging rights,” he said.

The band will spend the next two weeks practicing and perfecting its routine, which has an alien-meets-human theme. “The show is a depiction of an alien infiltration,” Fuller explained. “The alien species coming to Earth and mingling with the human race.”

Fuller said the band began working on the show in July. “We’ve still got another two weeks and we’ll be making some changes,” he said.

He said the entire band of about 150 students has worked hard to earn their superior rating. He said he’s proud of the work they’ve put in to being the best. “It’s a lot of blood, sweat and tears,” he said.

According to the score sheets from the evaluation, Wesson’s band scored 2s from the three judges, giving them a 2 overall in the 3A class.

Loyd Star, in the smaller 2A class,  scored 1s from two judges, but a 2 from the third. They earned a 1 overall for the band. The color guard also received a 1.