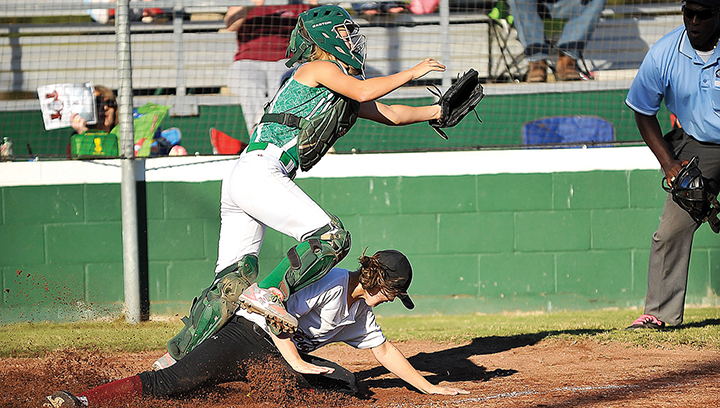 Photo by Teresa Allred/West Lincolns catcher Ashley Tabor misses the tag on a Richton baserunner at home plate in the Bears’ first-round playoff series against the Rebels Tuesday.

The district champion West Lincoln Bears struggled to get the bat on the ball Tuesday night against Richton. That and several errors in a Game 1 defeat led to an early exit in the playoffs for Coach Andrew Redd and the Bears.

Despite some decent hitting from both teams, the defenses were able to keep the game scoreless until the fifth inning when the Rebels’ bats came to life. With runners on first and second and two outs, Richton’s Baili Meadows hit a two-run single.

Later, an error on the throw by the Bears would bring in the Rebels’ third run of the inning before the West Lincoln defense was able to get out of the inning.

The Bears managed to load the bases in their half of the fifth inning, however they failed to capitalize as the Rebels were able to get the final out to strand West Lincoln runners on base. The Rebels added five more runs in the top of the sixth, as Mackina Benn got things started with a double.

Alyric Scott followed with a triple to bring in Benn. Destin Daumer followed suit with a single that brought in Scott. Another error by the Bears led to two more runs by Richton and the visiting Rebels took the first game of the series by a final score of 8-0.

The Lady Bears jumped out to an early lead for what was a defensive struggle in Game 2 of the playoff series. Redd was able to hit a single and Morgan Newman followed with a single of her own. Sarah Jane Doty then hit a single to bring in the first run of the game for the Bears.

After giving up the run, the Rebels’ defense was able to keep the Bears scoreless until the fifth inning. Then, with two outs, Richton walked two batters and Georgiana Allen hit a single to bring in a score.

Davis followed with a single to load the bases, but the Rebels’ defense was able to get out of the inning before West Lincoln could score again. Richton was unable to plate any runs in the game though and the Bears forced a decisive Game 3 with a 2-0 victory.

Despite the Rebels threatening to score first in Game 3, the Bears’ defense was able to strand runners on second and third base. West Lincoln’s Davis led off the Bears’ frame with a single and Newman and Doty followed with a single each to load the bases.

The Bears would get the first run of Game 3 by way of a single before Richton was able to get out of the inning. The Rebels made their run in the second inning, starting with a lead-off single by Caitlin Byrd. After a double by Madelyn James, Emma Cochran was able to bring in a run for Richton with a single.

The Bears were able to minimize the damage and got out of the inning with the game tied 1-1.

The Rebels got going again in the third as McSwain led off the with a double. Camille Green followed with a single. Scott then lined a hard hit single to center field to load the bases. Another single by Daumer after would bring in another run for the visiting team.

An error by West Lincoln allowed the Rebels to score two more runs and Byrd hit a single to bring in another run.

Errors continued to be a problem for the Bears, as yet another run plated for the Rebels due to miscues. West Lincoln was able to finally get out of the inning before the Rebels’ lead grew.

The Rebels got the last score of the game in their half of the seventh inning to take Game 3 7-2 and eliminate the Bears from the playoffs.

“I’m proud of the girls and their hard work and energy. We didn’t hit the ball well. Playing slow pitch gets us used to pitching and baserunning so we’re ready for fast-pitch softball,” Redd said.

Cougars run away with Game 3 to beat Ole Brook