Wolves look to rebound at No. 15 Holmes 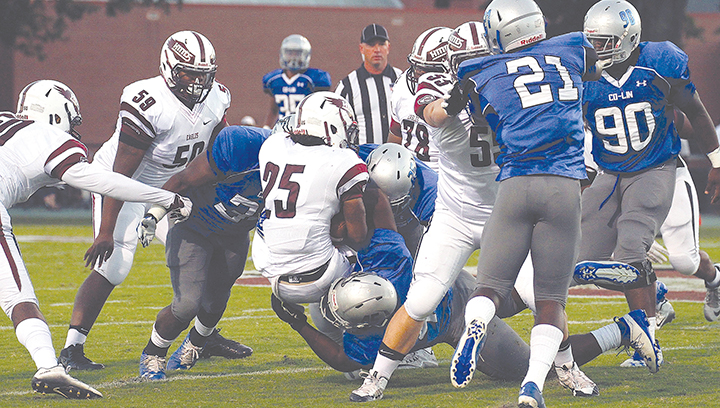 Fans can listen to the action live at colinathletics.com or at 104.3 FM or follow colinathletics on Twitter for live score updates throughout the game.

Last week proved difficult for the Wolves’ offense as they posted just 269 yards of total offense; the fewest in the past six years.

Ladarius Galloway was back in early season form for the Wolves as the sophomore racked up 104 yards and a score on 19 carries for the Wolves. The game was the Indianola native’s third 100-yard game this season. Overall the Wolves offense seemed to find their footing in the running game, which had sputtered slightly in the past couple of weeks. Sophomore wide receiver DeAndre Barnes grabbed his second touchdown on the season. The score came on an eight-yard bullet from quarterback Dominic DeLira.

The Mt. Olive native wrapped up 10 tackles, three for a loss, one sack, and a fumble recovery. Colton Magee continued his excellent play as he posted seven tackles to bring his season total to a team leading 49.

The Wolves’ defense struggled on third-down plays last week as the Eagles converted nearly 70 percent, including a 43-yard third down touchdown pass early in the fourth quarter.

Thursday’s matchup offers the Wolves a chance to get a non-division win over a nationally ranked opponent to help build confidence heading into the final two games of the 2016 season.

The game also serves as a homecoming for head coach Glenn Davis who spent time as an assistant coach with the Bulldogs early in his career.

The game should present the toughest battle yet for the vaunted Co-Lin defense. Last week, in a loss against East Mississippi, Holmes accumulated 622 yards of total offense. They tallied 437 on the ground and 185 through the air, but their defense also surrendered  488 yards on the defensive side.