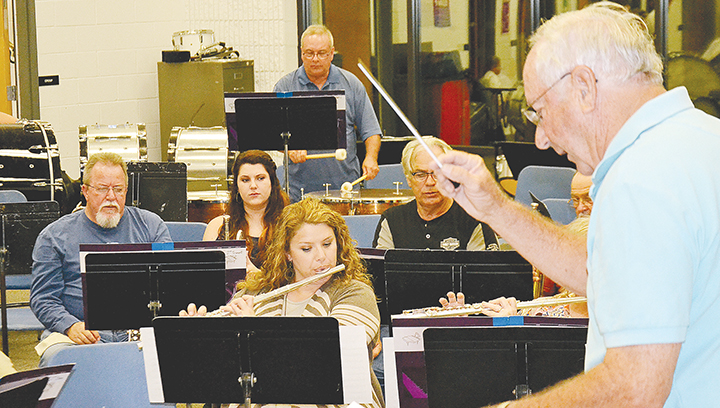 Photo by Donna Campbell/Leroy Smith leads members of the Ole Brook Wind Symphony at a recent practice. The group of area musicians will perform a free concert Tuesday at 7 p.m. at Easthaven Baptist Church.

Symphony musicians aren’t ones to toot their own horns, but in this case they should — and do.

Members of the Ole Brook Wind Symphony this week picked up their trumpets, flutes, saxes and tubas and together made some beautiful music. It was only a practice, but as practices go, it was performance worthy. They’ll be showcasing those talents for real Tuesday at a free concert at Easthaven Baptist Church, 130 Hwy. 84 in Brookhaven.

The show begins at 7 p.m. and features a variety of pieces from marching music to an armed services medley with a little jazz thrown in for good measure.

The music is usually chosen by the conductors, retired band directors Leroy Smith, of McComb, and Stanley Stewart, of Wesson.

The symphony is composed of more than 30 musicians who hail from Lincoln, Pike, Lawrence and Copiah counties and surrounding areas. There is even someone driving in from Jackson, Edge said.

Edge, the spokesman for the band, is an engineer by trade, but has a love for music. That’s the common bond that brings the group together, he said.

While many in the symphony are retired band directors, there’s also a dentist, interior designer, teacher, banker, radiation tech and soldier.

They meet on Tuesday nights to practice for the two concerts they perform for the community — one in the spring and another in the fall. This year they’re adding a special holiday show at Christmas. It will be Dec. 13 at Easthaven.

For this fall show, the program includes selections by the concert band, directed by Smith, which include “The Gallant 7th” by John Philip Sousa, “As They Return,” “When the Stars Began to Fall,” “An Irish Rhapsody, “Circus Days March” and “Fandango.” The jazz band, under Stewart’s direction, will perform “Take the A Train” and “Don’t Know Why.” The latter features vocals by Shelley Smith.

The finale will be an armed services medley.

The Ole Brook Wind Symphony began in 2001 as an idea by Susan Jones and Patsy Warren, who’d been to other community concerts and felt like Brookhaven needed to be represented as well.

They were joined by Shaw Furlow, George Edmonson and Stewart. Only Stewart still plays with the symphony, said Edge, who has been with the group since 2003.

The symphony is a completely volunteer group and anyone who plays brass, woodwind or percussion instruments is invited to join.

There is no age limit, dues or fees and no audition is required to join. “They need to be able to play the music and in most cases should have their own instrument,” Edge said. However, other musicians in the group can help with finding an instrument if one is not available, he said.

The band practices on Tuesday nights during the school year at Alexander Middle School.