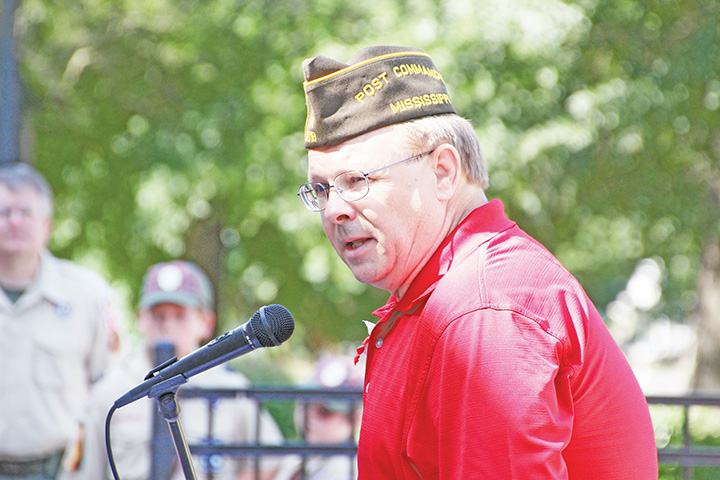 Photo by Alex Jacks/Commander Ken Powell, of the VFW Post 2618, recently spoke an event honoring veterans. He will speak Saturday at the local VFW open house.

Kids and adults will have plenty to do Saturday at the Veterans of Foreign Wars Post 2618 open house.

The VFW is located at 728 Industrial Park Road.

In addition to being their main fundraising event of the year, Commander Ken Powell said it’s an opportunity for local veterans to reach out to the community.

“Come and enjoy fellowship with the VFW,” Powell said. “We’ve got veterans representing every war from World War II to the current wars in Iraq and Afghanistan.”

Along with sponsoring writing contests for students at local schools, the VFW also reaches out to help local veterans on hard times.

“We do a lot of things to be a community service,” Powell said.

The event will run from 10 a.m. until 3 p.m, where the VFW will be giving out door prizes and selling pulled pork sandwich plates and raffle tickets. Participants have a chance to win a Ruger Hawkeye rifle, 200 gallons of fuel and a $100 Home Depot gift card. Most importantly, it will be a chance for the community to socialize with local war veterans.

“This is an opportunity to invite the public in to learn a little bit about our veterans and what they’ve experienced,” Powell said.

There will also be plenty to keep the youngsters busy, he said. Children’s activities include inflatables, face painting and a junior carpenter woodworking class.

Firefighters from both Lincoln County and Brookhaven fire departments will make an appearance to demonstrate fire safety in recognition of Fire Safety Month.

Post 2618 is one of the the posts in District Three of the VFW, which also covers McComb, Magnolia, Woodville and Natchez. Powell would like to see Lawrence County get involved again in the VFW. “When I became district commander, one of my goals was to stand that post back up,” Powell said. “We have a lot of veterans in the Lawrence area.”

Powell said veterans interested in joining the VFW can call him at 601-757-6722. They are also welcome to stop by at the post every second Tuesday of the month at 5:30 p.m.

“We have a meal before our business meeting,” Powell said. “They can show up there, and we’d love to sign them up.”

Marine Pfc. James S. Smith, 19, of Liberty, will be returned to his hometown after being unaccounted for by Defense... read more