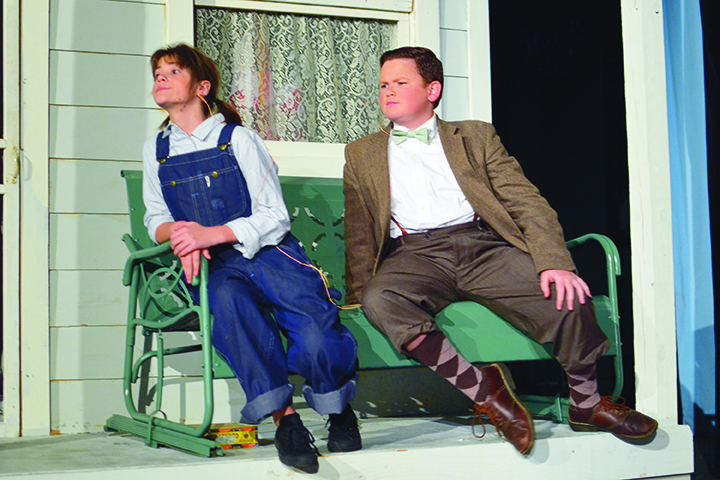 Photo submitted/Cadence “California” Laird, a sixth grader at Enterprise Attendance Center, plays Scout, and Josh McCreary, eighth grader at Alexander Junior High School, plays Dill. The last three performances of “To Kill a Mockingbird” at the Haven are today and Saturday at 7:30 p.m. and Sunday at 2 p.m. Tickets can be purchased by calling 601-990-2243 or will be available at the door while supplies last.

Following a successful opening weekend, the well-known novel “To Kill a Mockingbird” will take flight again on stage at the Haven Theatre for one more weekend of shows.

The novel, written by Harper Lee and dramatized by Christopher Sergel, tells the story of a young girl named Scout Finch as she lives through events that are tainted with prejudice in small town Maycomb, Alabama, in 1935. Scout’s father, Atticus, represents black man put on trial for allegedly assaulting a white woman in her home. As Atticus tries to unfold the real truth of what happened between the victim and the accused, the town is reminded of the racism that prevails within its borders.

There are certainly challenges with this play. The production switches back and forth between a neighborhood and a courtroom, which both need ample space for construction. Cast members must be able to portray real emotion, mostly showing conflict both with themselves and one other. Finally, the play should uphold the tone and lessons of the original novel in order to fully honor the story that is being told.

Brookhaven Little Theatre and the play’s director, Trey Waterloo, certainly accomplish all of these goals. The set is well-constructed with thoughtful details and effective displays of lighting. The cast varies in age from young teenagers to those almost retired and their acting talent conveys the conflict facing the Southern town. Audience members fully experience the themes of the novel and its life lessons.

“To Kill a Mockingbird” is a very well produced and performed play with enjoyable humor sprinkled throughout its darker storyline.

This well-thought-out production with its artistic direction, believable cast, and dedicated crew opens the curtains to the new play season for BLT. “To Kill a Mockingbird” sets the bar high for the rest of the year at BLT.

The last three performances are today and Saturday at 7:30 p.m. and Sunday at 2 p.m. Tickets can be purchased by calling 601-990-2243 or will be available at the door while supplies last.