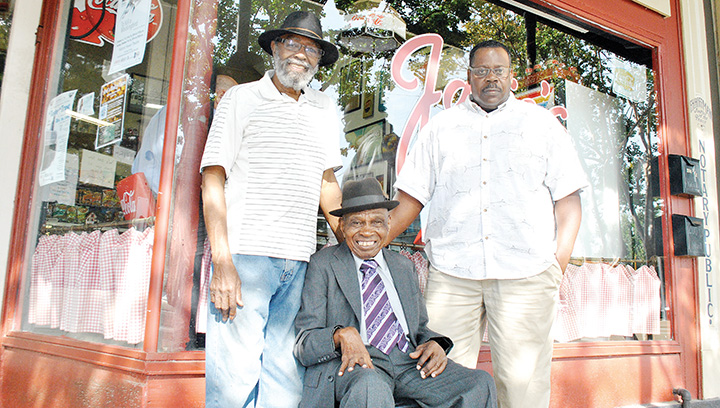 Photo by Aaron Paden/O Foundation Treasure A. C. Herring (left), Robert “Mr. Pete” Byrd and Race to Fitness organizer Elisa Corely gather for a photo Friday in front of Janie’s Pastry. Byrd has been described as a community icon and was chosen as the O Foundation’s 2016 VIP.

His real name is Robert Byrd, but most just call him Mr. Pete.

Elisa Corley described Byrd as a staple of the community — dependable and unchanging.

“We look at him as a role model,” Corley said. “He’s still going. He’s a better man than me and most people.”

When Corley isn’t working as a correctional officer at the Lincoln County jail, he organizes 5K events for the O Foundation’s principal program, the Race to Fitness.

The O Foundation has been a service organization for 10 years, but last year it shifted its focus to fighting obesity in the community. Every year, the organization holds its main fundraiser by choosing one person to honor with a VIP award, and Corley said Byrd was the best choice for their 10th anniversary.

“We sat down one day and tried to pinpoint one person that would be eligible,” Corley said. “I said the one person out of all the people I thought about would be Mr. Pete.”

Byrd said he knows just about everybody downtown. He can often be seen in the mornings at Janie’s Pastry or at Piggly Wiggly eating breakfast.

Byrd moved into a charming house on Minnesota Street with his mother in the 60s. He worked for a tailor until he had a heart attack that left him unable to work several years ago. Recently he was affected by arthritis. Despite his health setbacks, Byrd has not been kept down.

Although he never married or had children, Byrd is surrounded by his sister’s children and grandchildren, along with the Brookhaven community.

“I love Brookhaven. It’s a pretty good town,” Byrd said in the past. “I pretty much know everyone in town.”

He’s 86 now, but he’ll be celebrating his 87th on Nov. 6. When Corley called Byrd and asked him to be this year’s VIP, Byrd said he was overjoyed.

The VIP reception will be held from 4:30-6 p.m. on Oct. 27 at Betty’s Eat Shop on 126 S. Whitworth Ave. The VIP award reception is the O Foundation’s main fundraiser of the year, but admission this year is free.

To help cover costs, the foundation will be selling ads for their annual Ole Brook VIP Souvenir Book at the reception. The book will contain photos from the reception and tributes to Byrd.

As a service organization, the O Foundation has completed several projects over the years, but now that the group’s focus is fighting obesity, all of their projects are geared toward fitness runs throughout Lincoln County. The next one will be the second annual Bobcat Run in Bogue Chitto on Oct. 24. The event starts at 5:30 p.m. at the Bogue Chitto Attendance Center.

“This is not just a run for healthy people,” Corley said. “This is for people to come exercise.”

Those interested in the events can keep up to date by following the O Foundation at 601racetofitness.com.

Because the Race to Fitness events are centered around fighting obesity, there is no entry fee. Concessions are also provided to keep participants hydrated, and prizes are given out to first, second and third place winners.