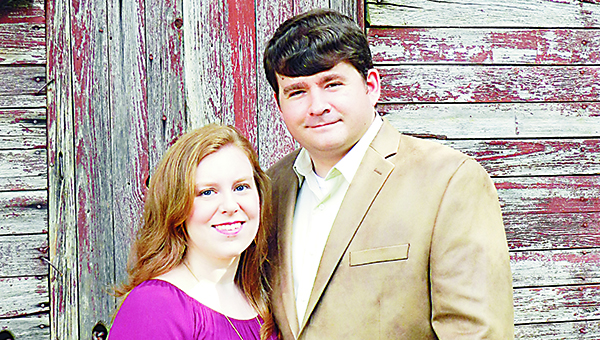 Phillip and Julie Wells, of the Divide community, announce the engagement and approaching marriage of their daughter, Kelsey Nicole Wells, also of Divide, to Matthew Allen Lambert of Monticello.

He is the son of Mark and Diane Lambert of Monticello.

The bride-elect is the granddaughter of Vivian Lovie Plunkett, of Divide, the late Mr. Dennis Lavon Plunkett, Mrs. Juanita Wells, of McComb, and the late Mr. Maurice Wells.

The prospective groom is the grandson of Alvin and Carolyn McCardle, of Hazlehurst, the late Mrs. Peggy Hall, Virginia Lambert of Monticello and the late Mr. Nick Lambert.

He is a 2006 honors graduate of Copiah Academy in Gallman and earned a Bachelor of Science degree in biology from Mississippi State University in Starkville in 2011. He most recently continued his education at Copiah-Lincoln Community College in Wesson, where he earned an associate’s degree in nursing in 2015. He is currently employed as a full-time registered nurse at King’s Daughters Medical Center in Brookhaven.

The couple will exchange vows on Saturday, Oct. 22, 2016, at 4 p.m. at their home church, Divide Memorial Methodist Protestant Church in Divide. After their honeymoon to the Great Smoky Mountains, they will make their home in the Divide community.

Formal invitations have been sent.

Photos by Julia MillerMembers of Brookhaven Academy’s Class of 2018 kicked off homecoming celebrations with the junior production, which featured... read more