A woman accused of embezzling money from the Bogue Chitto Volunteer Fire Department was ordered to undergo a psychological evaluation in a Lincoln County Circuit Court hearing Monday, at the request of the defense’s attorney.

Helen Jean Mercier, 68, was arrested Aug. 31 on charges of embezzlement. 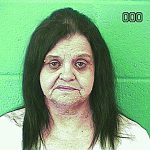 She is married to former Bogue Chitto Fire Chief Sedgie Mercier, and was serving as treasurer at the department when the embezzlement is alleged to have taken place.

Mercier will be examined by a qualified psychiatrist at the Mississippi Neuropsychiatric Clinic in Ridgeland. The court order recommended Dr. Mark C. Webb, but noted that the facility could designated another doctor to oversee the evaluation.

The Aug. 26 indictment alleged that Mercier “did willfully, unlawfully and feloniously covert to her own use money that belonged to the Bogue Chitto Community Volunteer Fire Department.”

The investigation for the case was handled by the district attorney’s office.

Soon after Mercier’s arrest, Bogue Chitto Fire Chief Blake Wallace declined to comment on how much money was taken, but he did say it would be a significant burden on the department’s finances.