Breaking records and setting new ones is nothing new to Franklin County’s Chris Robinson. After all, he holds the career and single-season touchdown records at Franklin County High School.

And now he’s eyeing a few at Delta State University. 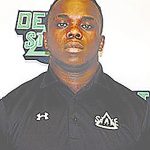 The junior running back has made the Gulf South Conference his own personal playground this fall.

Last week, Robinson tied a Delta State single-game touchdown record that dates back to 1936, by scoring six touchdowns in a 55-51 win for the Statesmen over West Florida.

He was named GSC Player of the Week for the second time this season.

Robinson has been a touchdown machine for the Statesman this season. He’s one away from tying the Statesmen single season touchdown record of 20 set by Josh Bright in 2000.

Three regular season games remain for the Statesmen before the playoffs begin.

“Our goal is to make the playoffs and win a championship,” the junior said.

Vision and finding open space are two of Robinson’s key attributes. He scored a Franklin High record 33 touchdowns his junior year, and followed that up his senior season with 26.

After his time at Franklin County, he spent two years at Gulf Coast Community College. A few D1 schools flirted with him, but none offered.

The Statesmen saw through the timeshare at running back while he was at Gulf Coast and wanted him to come there and be their every down back.

Robinson has showed out since arriving by rushing for 710 yards and leading the conference in scoring. His big game Saturday saw him run for 198 yards on 28 carries and five touchdowns. He added three receptions for 100 yards and a score.