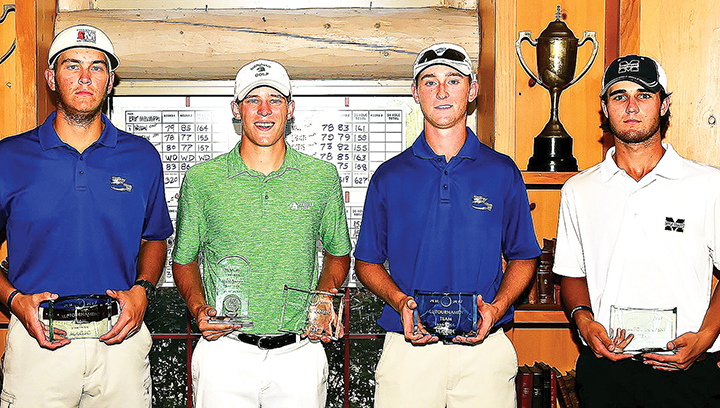 The Copiah-Lincoln Community College Wolves wrapped up the fall golf season with a second place MACJC finish at the Grand Bear Golf Club in Saucier on Monday and Tuesday.

Three of Co-Lin’s starting five players in the tournament were freshman.

“I was really proud of how our freshman played,” head coach Ronny Ross said. “They really stepped up for us in this tournament.”

Matthew Scoville and Zach Smith both made MACJC All-Tournament team after finishing with totals of 147. Scoville opened the tournament with a 71 on Day One and a 76 on Day Two.

Fellow freshman Zach Smith posted a 76 on Day One followed by a 71 on the second day of the tournament.

Sophomore Joseph Dendy continued his impressive play with a 72 backed up by a 76.

Freshman Matthew Perry finished the tournament with a 160 after rounds of 86 and 74.

Sophomore Brandon Blakney, Co-Lin’s fifth starter, withdrew from the tournament after a scoring issue in the opening round.

Cole Arseneault, a sophomore from Baton Rouge, Louisiana, played as an individual for the Wolves and finished with an opening round of 76 followed by a 75 for a tournament total of 151.

“This is a championship golf course that really challenges you as a golfer,” Ross said. “I am really proud of the way these guys went out and competed.”

The tournament was the last of the fall half of the season for the Wolves.

The Co-Lin golf team will be back in action March 6-7 as the team travels to Meridian to play at Northwood Country Club.

Going into spring play Ross said, “I have a good problem as a coach, and that is deciding which five of these players to start because all of these guys can play.”

Photo by Anthony McDougle/Members of the Bogue Chitto Bobcats’ slow-pitch softball team celebrate at the mound after the final out... read more