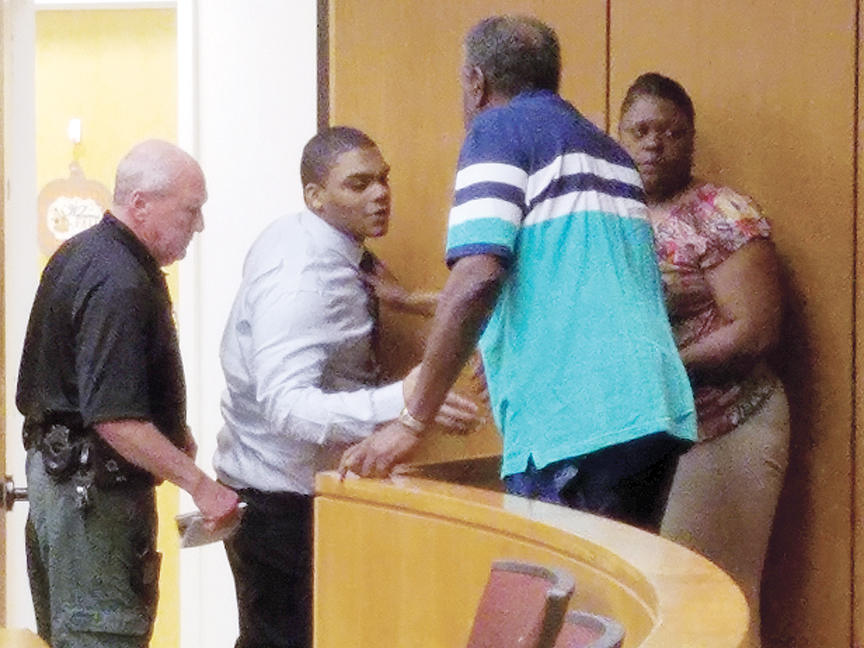 Photo by Donna Campbell/Chance Smith (second to left) spends a few minutes with members of his family Thursday after he pleaded guilty to aggravated assault on a law enforcement officer.

Chance Nicholas Smith, 23, was sentenced by Senior Status Judge L. Breland Hilburn, who was appointed by the Mississippi Supreme Court to preside over the case after Circuit Court District 14 judges Michael M. Taylor and David H. Strong recused themselves.

At the recommendation of Assistant District Attorney Diane Jones, Hilburn sentenced Smith to 10 years with five suspended to run consecutively with his present sentence and five years post-release supervision.

Smith is currently serving 20 years in prison after he pleaded guilty to manslaughter in Forrest County Dec. 15.

About nine members of Smith’s family and other supporters sat together in the courtroom, as Hilburn sentenced the young man.

Smith stood before the judge with his court-appointed attorney, Toby Welch of Pike County. The entire process took less than 15 minutes.

Smith was arrested in 2014 on charges of resisting arrest and aggravated assault on a law enforcement officer.

In July 2014, Smith was a passenger in a truck driven by Darrius Mitchell. Marzell Brooks, an officer with the Brookhaven Police Department, attempted to stop Mitchell and Smith for questioning in another shooting.

Brooks chased them to Center Street until the truck ran out of gas and Smith exited the vehicle on the passenger side and shot at the officer, according to testimony Jones read in court.

The two men ran a block over to Benjamin Street, where they were then captured by police, Brookhaven Police Chief Bobby Bell said in a story published in The Daily Leader after Smith’s initial arrest.

Hilburn was appointed by the Mississippi Supreme Court to preside over the case after Circuit Court District 14 judges Michael M. Taylor and David H. Strong recused themselves. Circuit Clerk Dustin Bairfield said Taylor and Strong asked to recuse themselves because Smith was related to one of their bailiffs.

Smith entered a blind plea to manslaughter in Forrest County Circuit Court last year for his role in a 2012 Christmas eve shooting death of a Hattiesburg man. He was one of four suspects involved in the shooting death of Elester Sartin Jr. 22, at the Pineview Apartments on Country Club Road in Hattiesburg.

Sartin died of multiple gunshot wounds, according to media reports.

Smith was arrested Christmas night and charged with murder.

A blind plea is a guilty plea without a set sentence, which is different than a standard plea bargain, in which the defense and prosecution agree on a guilty plea and in exchange, the prosecution will recommend a lighter sentence.

Smith was set to be released in 2034 on the manslaughter charge, but will serve an additional five years after Thursday’s guilty plea in the aggravated assault case.

Saundra Shannon, a youth pastor at Mt. Wade Baptist Church, sat with Smith’s family in the courtroom. She’s known Smith since he was a young boy and was his youth pastor.

“He was always a wonderful kid,” she said. “He’s just a beautiful spirited child. I hate this so much.”