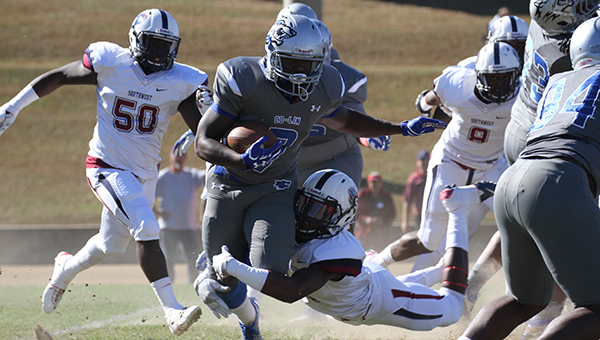 The Copiah-Lincoln Community College Wolves were firing onall cylinders Saturday as they defeated the Bears of Southwest 30-20.

The MACJC South Division matchup was the last home game for the Wolves in 2016 and was homecoming for Co-Lin. The win moves the Wolves to 5-3, 3-2 and Southwest to 2-6, 1-4 on the season.

The Wolves found the end zone first Saturday after the Bears muffed a punt that was recovered by Co-Lin’s Chance Herbert on Southwest’s 10-yard line. Co-Lin took advantage of the short field and scored on a one-yard rush from Brenton Spann. Griffin Sublett split the uprights with the point after attempt to give the Wolves a 7-0 lead.

Ladarius Galloway scored for the Wolves with 9:05 remaining in the half to extend Co-Lin’s lead to 14-0 after Sublett’s PAT. The Indianola native bounced off would be tacklers as he scampered for the 15-yard score that capped off an 88-yard drive.

The Wolves scored again just three minutes later after Dominic DeLira aired out a 34-yard toss to Datrin Guyton. The toss and catch put the Wolves up by three touchdowns with 6:16 remaining in the first half.

Southwest narrowed the lead early in the third after freshman quarterback Neil McLaurin scored on a 15-yard rush. With Ruben Maldanado’s extra point Co-Lin led 21-7 with 9:15 remaining in the third quarter.

The Bears scored again just seven minutes later. Chase Hughes rambled his way into the endzone from five yards out to cut the Wolves lead to 21-14.

The Wolves offense responded in the fourth quarter after Galloway found the endzone for the second time. The 22-yard rush finished an impressive 76-yard drive for the Wolves and extended the lead to 28-14 with 14:35 remaining.

Late in the quarter Hughes scored on another goal line rush for Southwest from just three yards out. Co-Lin’s Montez Sweat blocked Maldanado’s extra point attempt and Isaiah Swopes took it 90-yards for two points. The play gave the Wolves a 30-20 lead with just 5:49 remaining.

DeLira had another good outing for the Wolves as he completed 22 passes on 31 attempts. The Austin, Texas native had 231 yards, one touchdown, and one interception. Guyton was DeLira’s main target throughout the contest. Guyton racked up 143 yards on eight receptions and a touchdown. Galloway continued his stellar sophomore season rushing the ball. The Gentry High School graduate had 15 carries for 151 yards and two scores for the Wolves. Co-Lin posted a total of 415 yards in the matchup.

McLaurin finished the day 9-for-22 for the Bears with zero touchdowns and two interceptions. Fredrick Trevillian led the Bears in receiving with three catches for 20 yards. Nakia Trotter Jr. had 15 carries for 114 yards for Southwest. Hughes finished the contest with just 22 yards on six carries, but two touchdowns. The Bears had 307 yards of total offense.

The Wolves travel to Pearl River for the final regular season game of the 2016 season Saturday. Kickoff is scheduled for 2 p.m. Listen to the action live at colinathletics.com on 104.3 FM. Fans can follow @colinathletics on Twitter for live score updates.

Photo by Chris King\Loyd Star’s James Beard (5) evades a Bassfield player in an attempt to gain some yardage for... read more