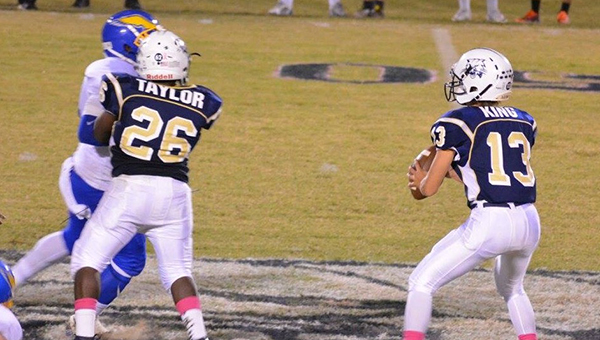 The Bogue Chitto Bobcats are still winless after dropping a home Region 4-1A game to Resurrection Friday 56-14.

Bogue Chitto (0-9,0-5) struggled to stop the duel running attack from a very good Resurrection team (8-1, 4-0). Patrick Watts and Justice Sharp ran all over the Bobcats.

The Bobcats got on the board first and, after two miscues from Resurrection, had a chance to score again. But as the game went on the Eagles put the Bobcats’ flame out. At the end of the first the Eagles had a 14-6 lead. At halftime they went into the locker room with a 35-14 lead. In the second half Resurrection scored 21 points to win the contest 56-14.

In the first quarter, the Bobcats got on the board when Trey Nettles connected with Kody Halford on a 20-yard pass. The two-point conversion was no good.

Resurrection’s Sharp and Watts then pounded it right through the heart of the Bobcats. Watts capped off the drive with a four-yard touchdown run. The PAT was good.

At the five minute mark the Bobcats’ defense got back in business when LaFredrick Dillon picked the ball off and returned it 73 yards. But the Bobcats stalled after that.

They stepped up again with another interception by Dillon and just like the previous drive the offense stalled and punted.

At the 1:55 mark, Watts got into the endzone on a four-yard carry and the PAT was good. At the end of the first quarter the Eagles led the Bobcats 14-6.

In the second quarter, the Bobcats scored on a three-yard reception by freshman wide receiver Zach Upkins. The two-point conversion was good.

After an interception, Watts found the endzone again on a nine-yard run and the two-point conversion was good. At the end of the second quarter, the Eagles had a commanding 35-14 lead.  It was more of the same in the second half.

Defensively for the Bobcats, Kody Halford led the team with 10 tackles.

The Wesson Cobras dropped a district game to Franklin County Friday night 49-33. “For the second week in a row,... read more