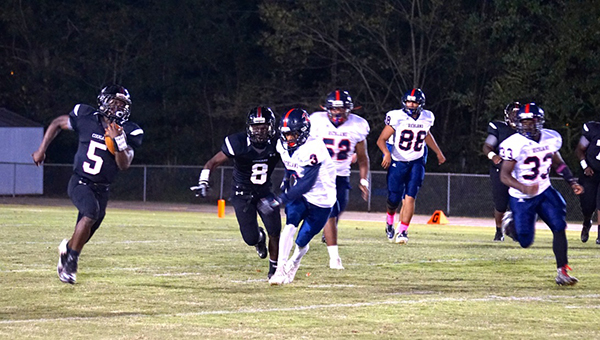 Photo by Jana Harp\Senior Charl’Tez Nunnery makes a run for it while being pursued by Richland defenders in Friday’s game.

It was senior night at Lawrence County High, and two decorated seniors led the Cougars to a big night.

Senior quarterback Charl’Tez Nunnery rushed six times for an incredible 202 yards, and passed for 134 yards and a touchdown.

The night ended on a sour note for Nunnery, however. Midway through the second quarter at the end of a 74-yard touchdown run, Nunnery was tackled in the end zone and suffered a dislocated right elbow.

Quitten Brown, who missed the first six games of the season because of an off-season knee injury, rushed for 167 yards and five touchdowns. Brown scored on his first three carries of the game, as Lawrence County racked up a whopping 610 yards of total offense on just 40 offensive snaps.

“We had a good night,” said third-year Lawrence County coach Jaymie Palmer. “We did well on offense, and with the exception of a couple of plays, had a good night on defense.

“Obviously, Charl’Tez is a key member of our team. His injury was unfortunate. Hopefully, we’ll get some good news about that — not so much for our football team, but for that excellent young man.”

Nunnery ran for 36 yards on the first play of the game. Brown scored on a three-yard run on the next play. Gage White made eight of nine extra-point attempts. His first gave the Cougars a 7-0 lead.

Three minutes later, Brown scored on a 40-yard run that was set up by runs of 29 and 16 yards by Nunnery. Shortly after that, Nunnery ran for 30 yards, then passed to Marcus Atterberry for 16 yards to set up a 26-yard touchdown pass to sophomore Tywan McLaurin.

The Rangers then stopped the Cougars’ next scoring threat with a pass interception. Midway through the period, however, Nunnery took off on his 74-yard scoring jaunt, suffering his arm injury at the end of it. That score made it a 34-6 game.

Late in the first half, Francis threw his second touchdown pass, a 16-yard to Jerry Nguyen. It was 34-13 at the half.

Francis had a good night for the Rangers, completing 14 of 24 passes for 164 yards. His first pass of the second quarter, however, was intercepted and returned for a touchdown by Lawrence County sophomore Jerome Dudley. After another interception by the Cougars’ Eddie Pierre, Brown scored on a 60-yard run, making it 48-13. The game clock was allowed to run freely after that.

Midway through the third quarter, Brown scored on a one-yard run that was set up by fullback Brandon Bullock’s 22-yard run. Bullock rushed for 52-yards on 4 carries, and freshman Kylan Cooper had 44 yards on four attempts.