Panthers have little trouble with Mustangs 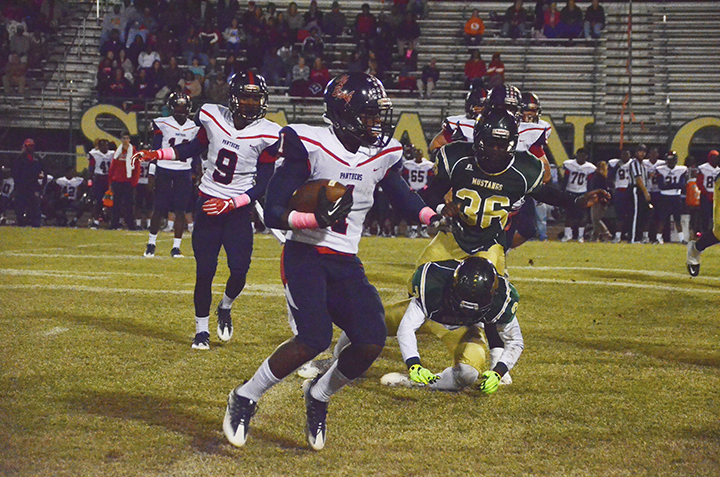 West Jones had a chance to get right in the thick of the race for the Class 5A playoffs on Friday when it hosted Ole Brook. But a stingy Panthers’ defense (157 total yards allowed), and three rushing TDs by running back Damarrell Leggett, made the visit to Jones County a victorious one for Ole Brook as it knocked off the Mustangs 24-12 at The Horseshoe.

“You gotta give your hats off to West Jones. I think their coaches do a good job of teaching the kids how to play the game and how to play the game the right way. They played extremely hard and when you do that good things happen,” said Ole Brook head coach Tommy Clopton. “Hats off to our kids. I think our defense played really strong for three quarters, we put them in a hole early. Our offense was kind of up and down, but in the second half we did a really good job of controlling the line of scrimmage. We ran the ball hard and we found a way to finish the game. I’m very proud of our team.”

The Panthers got on the board first when Leggett scored on a three-yard run. Tyler Mixon booted the PAT to give Ole Brook a 7-0 lead with 5:11 to go in the opening quarter. Leggett’s TD run was set up by a 47-yard pass play from Panthers freshman southpaw QB Byrion Robinson to Don Blandon which gave the Panthers’ first down and goal at the West Jones three-yard line.

The Mustangs responded late in the quarter when Antoine Kirk intercepted a Robinson pass and dashed 60 yards for a score. The PAT failed on a bad snap and Ole Brook led 7-6.

Mixon slid a 44-yard field goal attempt a few feet to the right just before halftime and the Panthers maintained the 7-6 lead at the break.

The junior kicker for the Panthers put the only points of the third quarter on the board when he drilled a 25-yard attempt to increase the Ole Brook lead to 10-6 with less than a minute to play.

A pair of Mustang miscues on the same play helped the Panthers’ next scoring drive. A West Jones defensive back was whistled for a late hit out of bounds and another was whistled for a dead ball personal fall. The pair of 15-yard penalties were marked off and the ball was moved from the West Jones 49 down to the 19 for Ole Brook.

After a penalty and a short gain, the Panthers faced a third down and 18 at the Mustangs 26 and Robinson found John Hilbert for a 23-yard gain to the West three-yard line.

Two plays later, Leggett punched it in from two yards out. Nixon added the PAT and the Panthers pushed their lead to 17-6 with 8:38 to go.

The Mustangs didn’t quit and got to within 17-12 with 5:54 left when sophomore quarterback Hunter Parish found Brandon Jones for a 21-yard TD strike. The try for two failed.

But it didn’t take long for the Panthers to slam the door shut on a potential West Jones comeback.

With less than four minutes to go in the game, Leggett burst through the line of scrimmage untouched and was off to the races for a 38-yard TD romp that sealed the win for the visitors from Lincoln County. Nixon added the final point of the night with the PAT.

“We had a couple of chances and it came down to a couple of plays and we didn’t make them.” West Jones head coach Scott Pierson told his team after the game. “The bottom line is, in life you get knocked down but you get back up and you finish what you started. You finish what you start.“In life you don’t always get what you want. Sometime you get kicked in the teeth. How do you respond? You get up and go to work and good things happen.”

With a win Friday the Panthers will secure their spot in the playoffs.

“We don’t care who we play, we just want to be in,” Clopton said. “In our region there’s not a big difference between one and four, everybody is extremely competitive. We talk about us. We don’t talk about what other people do because we control what we do and we know if we win out we will be 5-2 in the region and we will be in the playoffs. We will be glad to be in and we will go wherever they tell us to.”

Leggett finished with 128 yards on 26 carries with three TDs for the Panthers. Jones paced the Mustangs with seven receptions for 77 yards and a TD.

West Jones came into the game averaging nearly 200 yards per game on the ground and the Panthers limited the Mustangs to 38 yards on 18 carries.