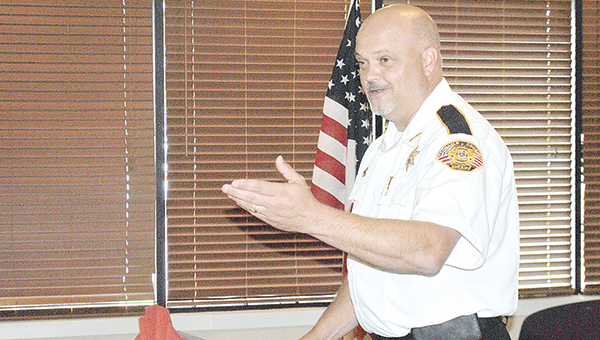 Photo by Aaron Paden
Lincoln County Sheriff Steve Rushing speaks to the Lincoln County Republican Women Thursday during their bimonthly meeting. Rushing was honored by the group for his service to the county.

Crime is up in some areas and down in others, but for Lincoln County Sheriff Steve Rushing, drugs are always a major problem for his department.

“Drugs have always been and always will be one of our main headaches,” Rushing said. “And that leads to the property crime that we have to deal with, too.”

Rushing gave an update on the state of the Lincoln County Sheriff’s Office Thursday after being honored for his service to the community by the Lincoln County Republican Women at their bi-monthly meeting. The luncheon was held at Mitchell’s and was also attended by Rep. Gregg Harper, R-Miss.

Rushing said he expects the sheriff’s office to receive about 11,000 calls this year, and he has roughly 90 to 95 inmates in the Lincoln County jail at any one time.

Rushing expressed regret that many in the jail system were frequently repeat offenders.

“That’s unfortunate, but at the same time it’s a way of life for us,” Rushing said.

Rushing said he has 22 full-time officers in his department, and he said they’re a hard-working bunch.

“I try to get them all the training I can,” he said. “If you don’t keep up with the current stuff, then you’ll be way behind.”

Rushing warned the group to keep an eye out for identify theft — a growing problem throughout the nation — and said he tries to keep his door open to anybody and everybody in the community.

Rushing was originally appointed as sheriff in 2006 after the previous sheriff, Wiley Calcote, resigned and pleaded guilty to embezzlement.

At the time, Rushing was a Democrat, but he switched parties in 2013. Rushing said at the luncheon that the party welcomed him with open arms.

“It was kind of like I’ve come home,” Rushing said.

Chamber says ‘thanks’ with annual banquet

The Brookhaven-Lincoln County Chamber of Commerce is gearing up for the night it will celebrate and honor the achievements and... read more