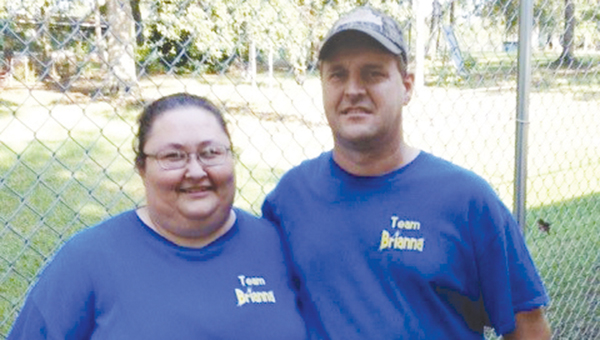 Photo submitted / After their 11-year-old daughter, Brianna, died before she could get a new heart, Kim and Byron Givens, of Monticello, started raising money for Make-A-Wish Mississippi so young children like Brianna could have their wishes granted by the organization.

Personal tragedies can often spark a change in someone’s life.

For Byron and Kim Givens, of Monticello, a tragedy in their own family inspired them to help others.

“I had a daughter,” Byron Givens said. “When she was first born in the year 2000, she had four open heart surgeries and a couple of pacemakers.”

Brianna Givens was born with a serious heart disease, and she died at age 11 just before she could be placed on the list for a new heart.

Five years later, it’s still difficult for her daddy to talk about.

Before her death, she was recommended to Make-A-Wish Mississippi by Dr. David Braden at Batson Children’s Hospital in Jackson.

The Make-A-Wish Foundation grants wishes to children diagnosed with life-threatening medical conditions. Brianna wanted to take a vacation to Tennessee, and Givens said Make-A-Wish covered all the costs.

“They pay for the whole nine yards,” Givens said.

He was impressed with the work the organization did to bring happiness to his daughter.

“It touches lives,” he said.

The couple has volunteered their time to raise money for the organization, so other children can have their wishes granted.

The Givenses were recognized in September by Make-A-Wish for raising the most money for the organization this year. The couple raised $10,286 through their participation in the Walk for Wishes held in Brookhaven.

But this isn’t the first time they’ve brought in big numbers.

Last year, they raised a little over $7,000, and Givens said he applied what he learned last year to raise even more this year.

It requires a lot of work with feet on the ground, he said. Givens said management at Walmart Supercenter in Brookhaven allowed him to spend several days in the parking lot raising money. Business sponsors are also an important source of money for the couple.

“For all the businesses around the local areas, I strongly recommend they sponsor Make-A-Wish,” he said. “It’s a good organization.”

Givens said the Make-A-Wish Mississippi organizations make good use of the money they received through donations and fundraisers. The work they do makes a huge difference in a child’s life, he said.

The wishes that are granted can provide a positive experience for a child who may not see the next year, he said, and the experience can sometimes bring families back together who have been broken apart by the stress of the child’s illness.