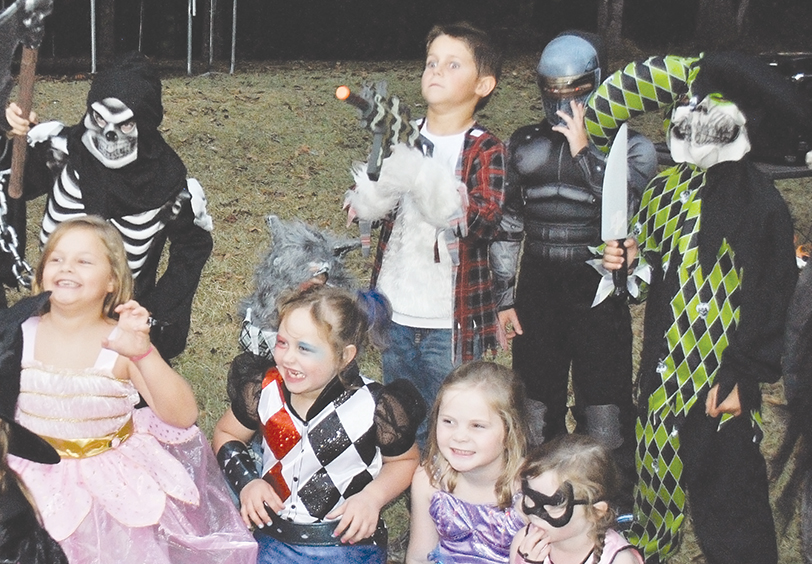 Magnolia Jones is a little girl with a brave heart.

For the past two years, the 6-year-old has been living with B-cell acute lymphoblastic leukemia. She has undergone testing, chemotherapy and the terrible side effects of the cancer treatment all that time, but today she is free of the disease.

When Jones got the “all clear” from her doctors, Toni Leggett, of Bogue Chitto, a family friend and a parent of two, decided it was time to celebrate.

“We’ve gotten close to her over two years,” Leggett said. “We knew she was ending her treatments. We’ve just always said she’s our little hero.”

Leggett organized a  “Scare Away Cancer” party. Parents gathered around a fire Saturday and listened to country music while the children tossed around a ball and swung high on a tree swing. The kids and adults released balloons in celebration.

Almost everyone was dressed in a halloween costume and many photos were taken of children with scary faces.

The party gave Jones a chance to have a normal childhood again, Leggett said.

Jones said she was happy the treatments were over, but she was more interested in having fun at a party with her friends than talking to a reporter about the illness.

Her mother, Emily Jones, seemed grateful for that. Jones said her daughter handled her illness fearlessly, but during the worst of her treatment she wasn’t able to leave the house.

It’s been a hard two years for Magnolia Jones and her family. She’ll still go for monthly checkups to ensure that the cancer doesn’t make a reappearance, but she’s done with the medicine and its side effects.

“It was scary,” she said. “But now I’m super excited. It’s good to get back to a normal life.”

Leggett said releasing the balloons for the young girl Saturday was a special moment for everybody, and she was glad the party turned out to be everything she’d hoped.

“Magnolia and her family have touched so many people’s lives and has brought us closer together,” she said. “We are so blessed to have such a special group of friends that pull together during the good and bad times.”

Two heads are generally better than one, and when it comes to beating cancer, two neighboring counties joined together is... read more