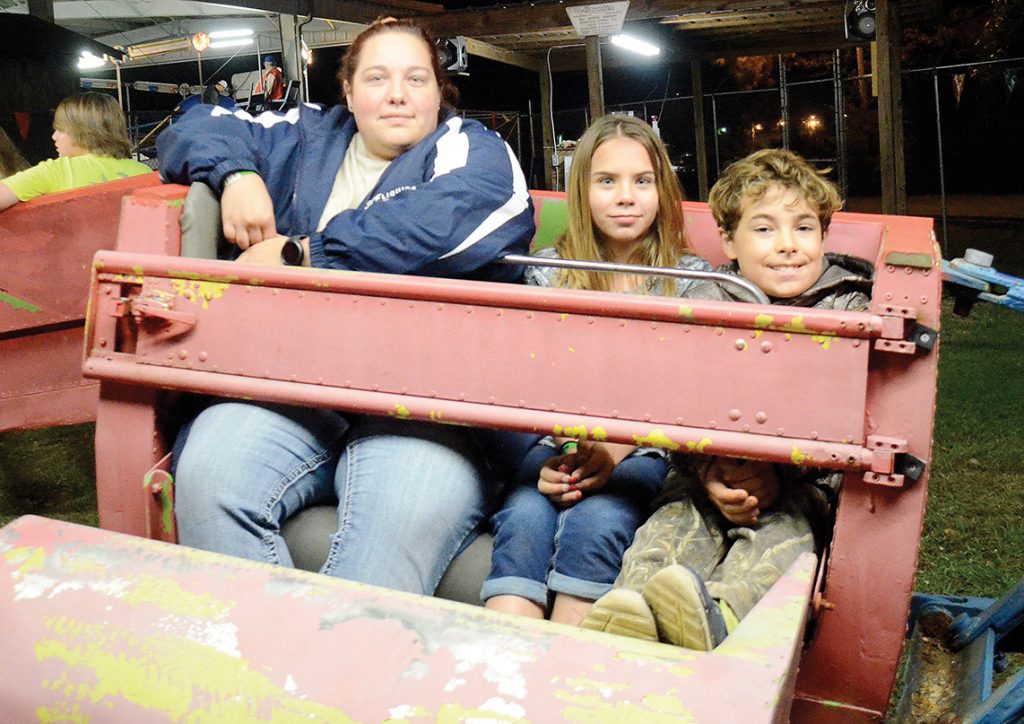 Photo by Aaron Paden/Shirley Dardar (left), Eliza Walley and Joman Lewis wait excitedly for The Scrambler to start at the Log A Load fundraiser Saturday at the Exchange Club Park. The fundraiser raised over $30,000 in one day for the Blair E. Batson Children’s Hospital.

With food, rides and games available, the Exchange Club Park has proven again and again to be both a spot for family fun and an important source of income for community fundraisers.

It was certainly a big fundraiser for the members of the forestry community in the Mississippi Loggers Association, who raised over $30,000 in a single day for their Log A Load for Kids fundraiser.

“Everything went wonderfully,” event organizer Anna Smith said. “Everybody had a good time.”

Log A Load for Kids is a nationwide campaign among forestry organizations to raise money for children’s hospitals, and the Mississippi Loggers Association has donated over $1 million to the Blair E. Batson Children’s Hospital in Jackson — the only children’s hospital in the state — since 1994.

This was the first year for the southwestern district of the MLA to hold the fundraiser at the Exchange Club Park, and it was big success for the district which represents Lincoln, Pike, Copiah, Lawrence, Walthall, Marion and Hinds counties. The district was awarded the organization’s top prize recently for raising $49,000 in a two-year period.

“It’s a fabulous number,” Smith said. “A lot came from out of town. They weren’t familiar with the Exchange Club Park, so it was really good for them to be able to see it.”

Smith said among visitors were seven children from Batson, the only children’s hospital in the state. Smith said the district had done several different kinds of fundraisers over the years, but when it was her turn to organize the event she wanted to do something the kids would enjoy.

“Blair E. Batson is a wonderful hospital that helps save the lives of young children every day,” said Smith, who owns Brian C. Smith Logging of Lincoln County with her husband, Brian. “The things that the families of patients have to witness are truly heartbreaking.”

Seven arrests made at a Brookhaven hotel