A man who came to the Brookhaven Police Department Wednesday for questioning in a homicide found himself charged with murder in the death of Lance “Tyrone” Mackbee. 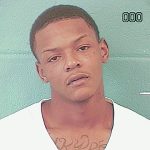 The Bogue Chitto man’s death is the city’s only homicide this year.

Travis Antonio Brinson, 21, of Brookhaven, was arrested around 1 p.m. “He got word that someone was looking for him and his girlfriend brought him in,” Brookhaven Police Chief Bobby Bell said.

Brinson came in to answer questions. He did not voluntarily turn himself in to authorities, Bell said.

Mackbee, 25, was found in a car parked on the side of the road in the 400 block of South Center Street shortly after 3 a.m. Wednesday, he said.

Alford said Mackbee had been shot several times, but a cause of death won’t be determined until an autopsy is performed, possibly today. Mackbee’s body was sent to the state crime lab for the autopsy, he said.

Bell said officers responding to a call of a man sleeping in his vehicle on Center Street found that the man was deceased. “They thought he was asleep,” he said. “They checked for a pulse and realized he was dead.”

Mackbee was not sitting behind the wheel of the car, he said.

“We have reason to believe the victim did not drive himself to that location,” Bell said.

The chief said some individuals have questioned whether officers were called to the vehicle earlier in the night but did not approach it or see Mackbee inside. Bell said officers did respond to a call around 10 p.m. concerning a car that wouldn’t start. However, Mackbee was found in a car in a different location on Center Street near the intersection with South Second Street. The two cases were not related, he said.

Bell won’t reveal a possible motive for the fatal shooting. He said he does not want to speculate while the case is under investigation.

“We still have some loose ends we’ve got to tie up,” he said.

A man found dead before dawn today in a car parked on Center Street has been identified as Lance “Tyrone”... read more